This is the first post on the Sufferin’ Summits preview.

But first, a little philosophy about the route.

I’ve tried to make the route as hard as possible, which means lots of elevation gain and as much steepness as I can find, but I’ve also worked hard to keep it as short as possible. Those two are obviously in tension; I could easily add a very painful 2000’ more of climbing, but I’m happy with the overall distance as it is.

I have also tried to make the route flow. That means limiting the number of “up and down the same road” sections, and not climbing up the same section of road more than once.

And finally, I’ve tried to make it worthwhile. That means climbing to places where there’s a nice view.

If you are purely interesting in elevation, I recommend the Zoo Hill Century instead.

I’ve done the Highlands climb up from Issaquah a number of times, first on the Eastside Tours Ride that Per Sunde used to lead (and now I lead), and then on my own. I never really liked the climb very much; the bike path is fine but not really very pretty, but it is a decent way to get up onto the plateau.

Then, a couple of years ago, I decided to climb up into Grand Ridge. My first ascent was up the main street – Park Drive – and was a bit of a slog, though if you go all the way to the top, it’s worth it.

Then I found a nice way to skip the busy part of the development, with a no-cars section off of Black Nugget road, and now I like the trip much better. It does not have the pure challenge of some of the later climbs, but it has some cool houses to look at (watch for the castle on the right side near the top), a very nice view, and a couple of fast descents.

This year, I’ve settled on a new route. It’s simpler, avoids some construction, and includes something special that the existing route did not.

Here’s a picture of the route, click on it to see it in RideWithGPS.com. Clocks in at 1061’ of up.

This is not, in fact, the hardest route up this particular hill. We start on the bike path near I-90, climb into the highlands and then work our way into a neighborhood and then a special surprise at about the 4 mile mark. The upper part is the same as previous years, but is less confusing.

At the top of Grand Ridge there is a short bit of driveway that you can climb if you’d like an extra 30’ of elevation gain.

The descent through the development is nice, and then the descent down Highlands is a bit of a screamer and the pavement isn’t perfect, so I recommend paying some extra attention.

We end up back in Issaquah heading west on Sunset.

I will leave you in suspense, eagerly awaiting the next hill, assuming that you haven’t followed Sunset drive to the west and seen the exceedingly obvious climb #2.

Here’s the gradient view. Due to inaccuracies in the elevation data, it’s not very good; the start of the climb at the bottom is more in the 12%, and there is not a 20% kicker near the top. 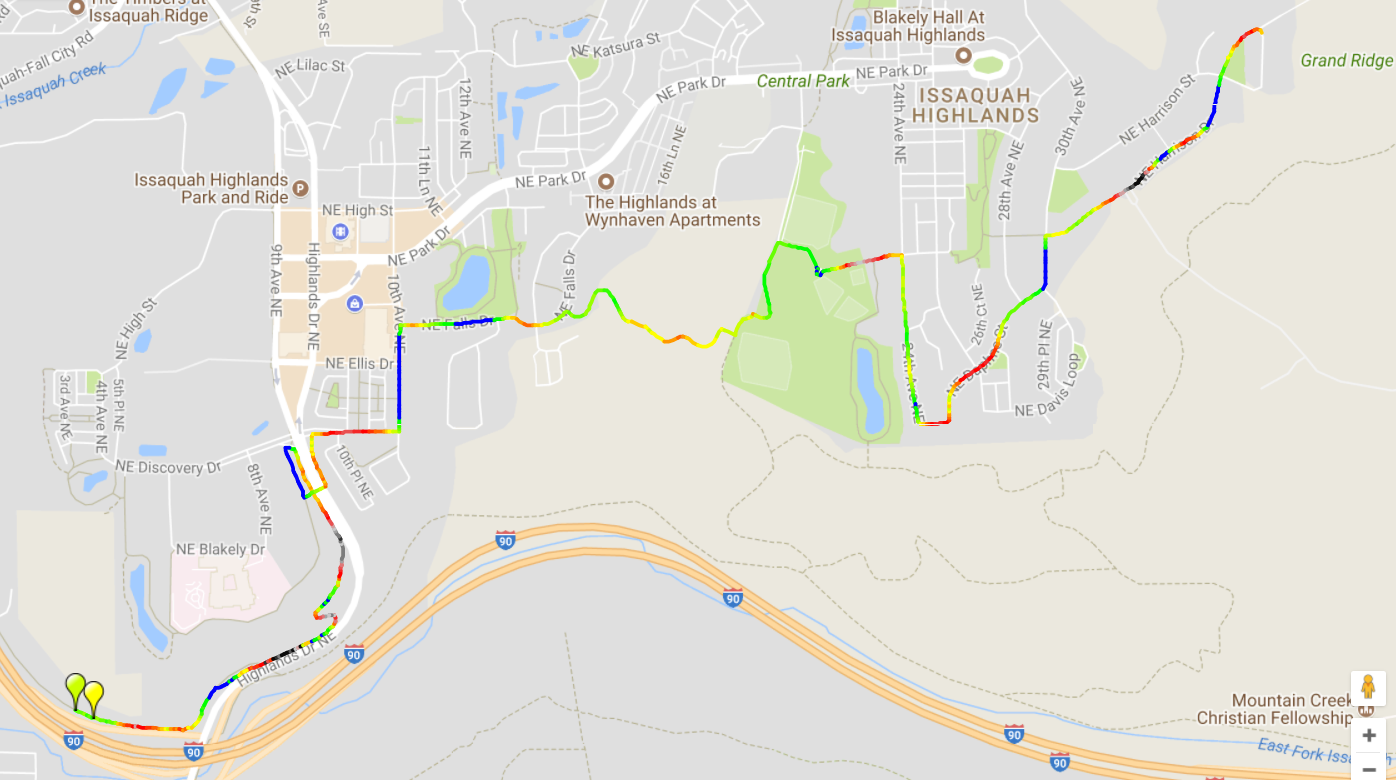