Certainly a surprise given the recent 90+ weather and the forest fire smoke that had the air quality hovering between “moderate” and “unhealthy” for a few days and generated a number of the red and orange sunsets that are so beloved in science fiction.

I have in the past asserted that a good cyclist should always have their excuses ready ahead of time, lest the urgent need for one catch them off guard, but this year things were very clear.

I simply did not have the legs to do the whole route of Sufferin’ Summits.

Over the past year, ongoing issues with my ischial tuberosities and an unexpected and as of yet unexplained interest in running resulted in an uncharacteristic dearth in riding, and especially, in climbing. During previous years, many weekends would find me hauling my bike and body up any conveniently situated hill and therefore build a decent set of legs, but that did not happen for the aforementioned reasons, and therefore my stated plan was to climb 2 – maybe 3 – hills, and call it a day. Seemed like a reasonable plan given the expected temperature and air quality, but to find it cool and crisp – and probably the best conditions for Sufferin’ Summits ever – was a bit disappointing.

But, as noted Stoic philosopher Marcus Aurelius said, “Crura si infirmus colles diutius”, which roughly translates to “If the legs are not strong, the hills are too long”.

Actually, I’m paraphrasing a bit, what he really said was:

If you are pained by any external thing, it is not this thing that disturbs you, but your own judgment about it. And it is in your power to wipe out this judgment now.

Sage advice indeed, though it might be fair to point out that if you are in charge of the entire Roman Empire, you might perhaps be insulated a bit more from external pain than others.

Anyway, our small group – small presumably because of the forecast for heat and smoke – headed out to climb Grand Ridge. This is one of my favorite climbs, and as usual, it did not disappoint, except that it was still a bit smoky on top and we could see the theoretical view of Bellevue, Mercer Island, Seattle, and the Olympics. And unfortunately all the houses they’ve built have gotten in the way of the views.

On the way down, we lost two group members to a broken spoken on a descent – thankfully without an accident – so we re-crossed Issaquah and started up Squak Mountain. There are two basic ways to get up Squak, and this is the more painful of the two ways, but we eventually finished the lower section, made our way above “house line” on the climb, and then finally topped out in the development in the top. Squak is unique in that it has no view to speak of from the top.  We descended back down, and I decided that I had a third hill in my legs.

We head over to Talus, a development stuck into the eastern flank of Cougar mountain. The main entrance has a nice climb up that we don’t take because there is a far worse way up to the north. It’s painfully steep at the start – 18-20% – and then the main part is 15% and only about a lane wide. Halfway you need to stop, unclip before you fall over, go around a gate, and then try to start and clip in again before you fall over. After you top out on that road, there’s a little paved connector between two parts of the development that’s easily over 20%, and then a steady 10% climb up to the top.

Exactly the sort of climb that I was looking for when I created the route, and it has the nice bonus that nobody knows about it.

After the top there, we work our way south. In previous years, we would climb a short steep section and hit the end of the road, but there’s a new development at that top and that yields another 250’ of up, all of it painful. That makes me happy – Talus was a big of a young brother compared to the bigger climbs next to it, but with that addition at top I think it holds its own.

And… After a quick descent and a nice spin back, I was done for the morning. Which felt really, really weird; it’s strange to start on a course that I know so well and then just stop after three hills. This reminds me a bit of climbing Hurricane Ridge out of Port Angeles; you spend 2 hours climbing, half an hour down, and then you are back at the starting point and it’s only 9:30 AM.

Here’s a fun little profile that I got from VeloViewer. 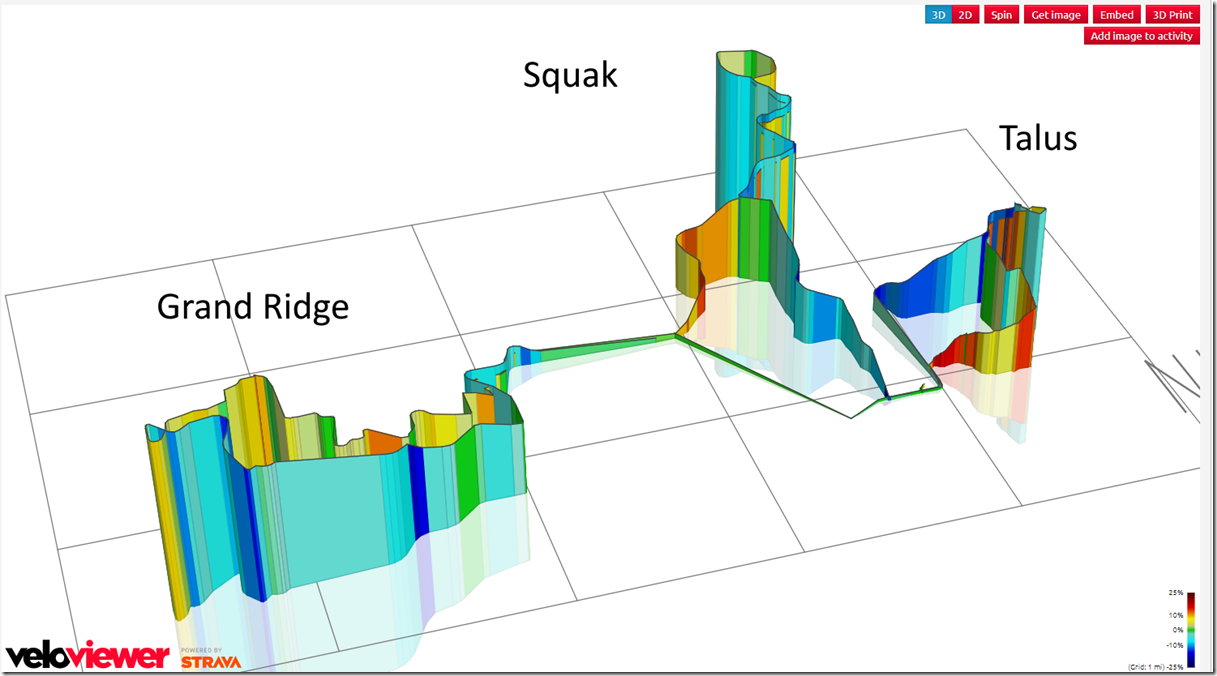