We have a couple of heated for out cat to hang out in, which she really likes. One of them lives in the living room near the windows, but unfortunately if she is in the bed she can’t see out the windows.

What was needed was a way to elevate her so that she could see out. Which seemed like a perfect opportunity for some CAD and CNC.

I fired up Fusion 360 and started playing around. I started with the basic dimensions; the top would be 18” square (the bed is really pretty big) and it needed to be 11 inches tall. Then it was off to build the basic model.

In the past, I’ve used “through tabs” which are easy to do but not aesthetically pleasing. In this design, none of the tabs go all the way through, which makes it a lot nicer looking.

After a couple of hours I had the basic design: 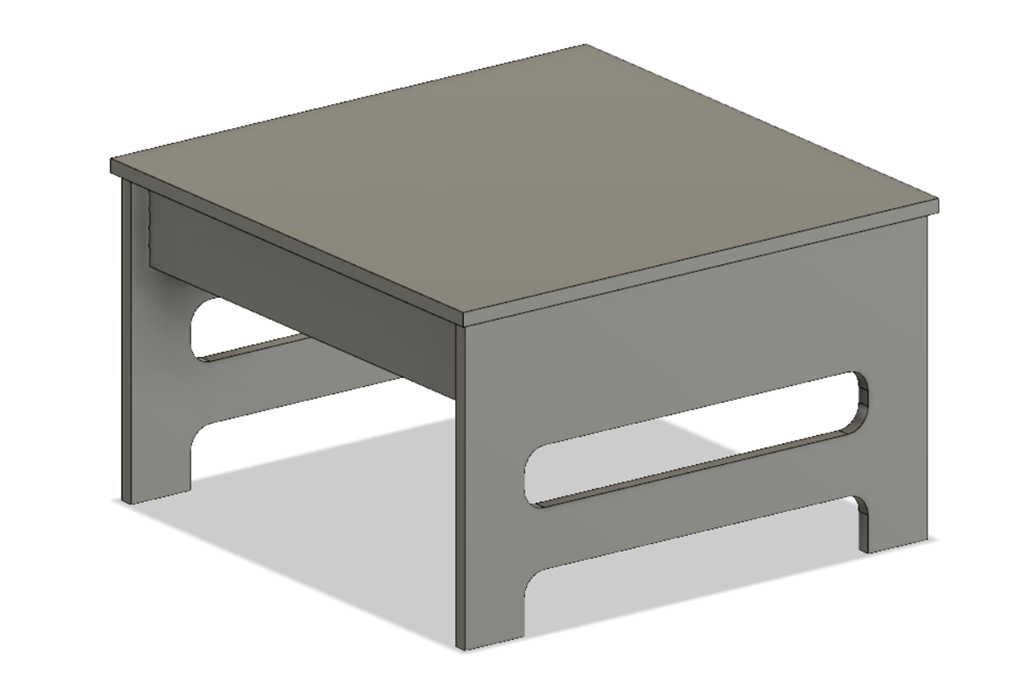 The bottom cutouts on the ends are so that there are four discrete legs for support, and the holes are to make it look a little more interesting. I played around with another slot farther up, but decided not to for reasons that will later become apparent. Note that there are no visible tabs.

Here’s the inside of one of the ends: 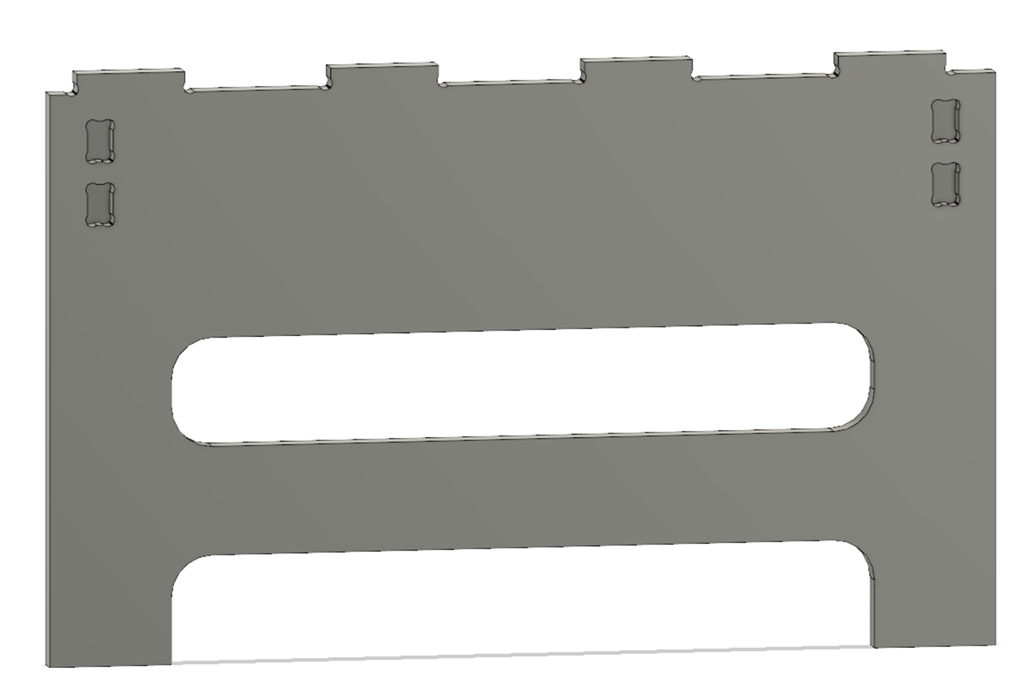 This shows the cutouts that I will make for the end; there is the outline and slot that go all the way through, the recessed pockets for the tabs from the sides, and then the tabs that will go into the pockets cut into the top.

There are “dogbones” cut at the corners; these are needed so that the rectangular corner of the tab has someplace to go. This is using the new “minimal dogbone” add-in for Fusion 360, which is a great improvement over the previous version.

I went to my lumberyard (Dunn Lumber) and procured a sheet of 12mm baltic birch plywood for $30. It comes in an exceedingly inconvenient 5’x5’ size, which means that I cannot fit it in the back of my pickup. I can, however, tie it to the top of my outback.

I trimmed the 5×5 sheet into a 2×5 sheet for this project and a 3×5 sheet for later projects, and then set up my workspace. It’s a melamine shelf with some thin sacrificial sheets of 1/8” MDF on top and then the actual wood clamped on top.

Shaper suggests that you use double-sided tape to hold the wood down, which is a really good idea that I keep forgetting to do. I added the domino tape so the shaper can figure out where it is, and started cutting.

It takes multiple passes to go through 12mm stock, and after a few options I settled on 5mm, 10mm (the depth of the pockets), and 12.3 mm to cut through.

Here’s a shot partway through the cutting: 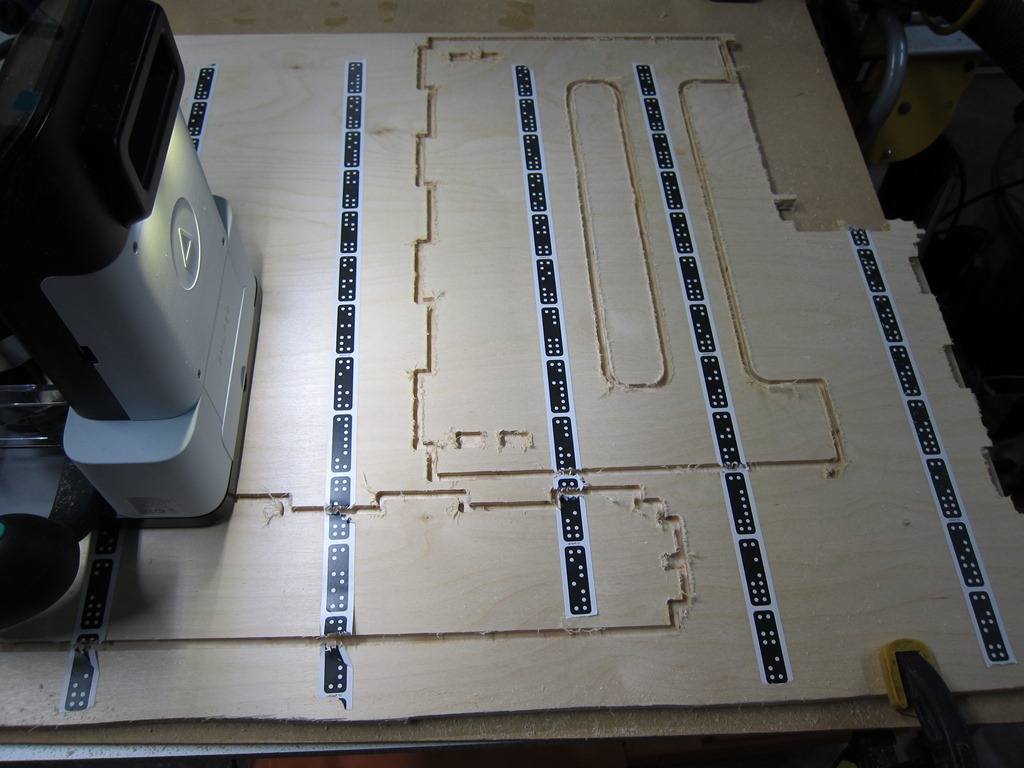 I took that picture because the Shaper crashed in the middle of the cut. It luckily remembers the layout so you can keep cutting when you startup, but you sometimes lose tracking before it finishes retracting the bit so there are small mistakes in the cuts.

I had about 8 crashes while cutting the parts for this. Unlike previous projects – where it would crash only while cutting and in reproducible situations – these crashes seemed to be much more random. I’m working with Shaper on it but haven’t figured anything out yet; in this case it cut flawlessly for about 45 minutes before any issues showed up, so I suspect it’s heat related.

Anyway, eventually the last part was cut, and I could fit the pieces together. One of the joys of the CAD-based approach is that if you don’t make mistakes, things just fit together. I used my soft-blow hammer and ended up with this: 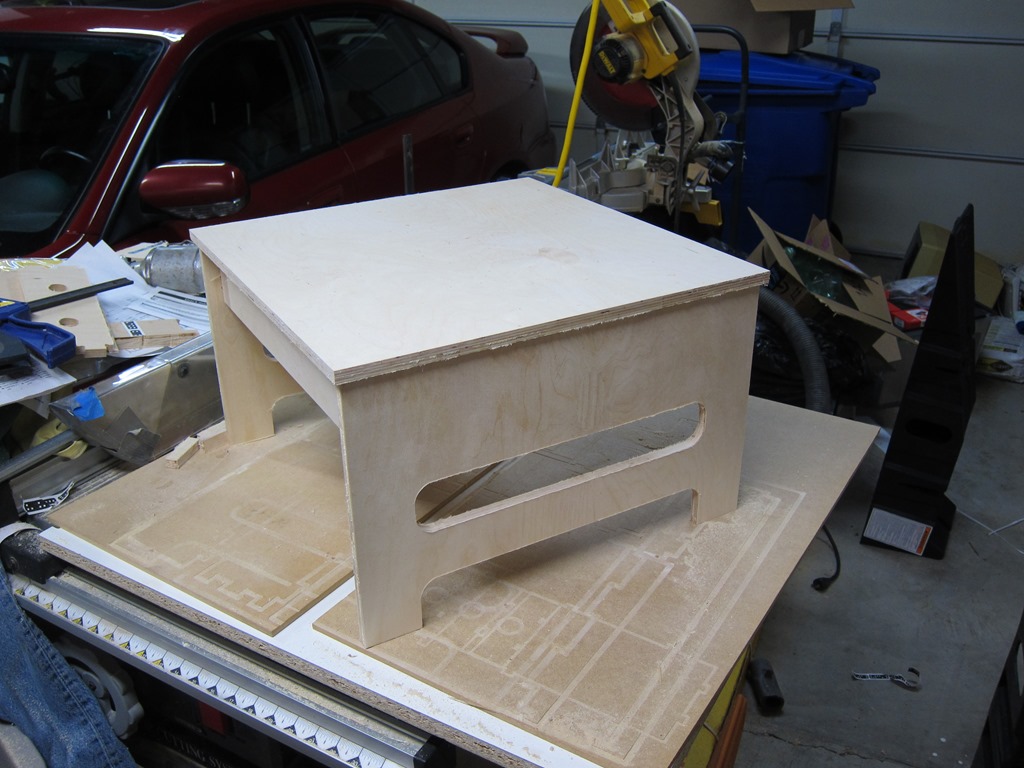 Definitely looks like a stool. You can still see a lot of fuzz that needs to be cleaned up and an overall sanding is in order.

It was at this point I realized that I messed and hid the nice surface of the plywood up instead of down, which means the display faces have a number of patches that should have been on the inside.

I spent a lot of time sanding and de-fuzzing the project, and it seemed like things were okay.

As you can see, it’s definitely a stool, but it’s not a definitely a cat stool. It needed something so that our cat would know that it was her.

After spending approximately 20 hours looking at cat drawings online, I came across a set that were very minimalist, and I picked four, two for the ends and one for each side.

Those got cleaned up an image editor and then engraved into the wood with my GlowForge. That took about 45 minutes.

The sides were glued together, assembled temporarily into the top for alignment, and clamped until they were dry. Then this was repeated to glue the sides to the top.

I wanted something a little more golden than the natural color, so I wanted a bit of stain. I decided to kill two birds with one stone and get a polyurethane with stain.

Bad idea. Maybe a good idea if you are spraying the finish, but applying by hand every slight difference in thickness shows up as a difference in color, and if you get any runs they look pretty bad.

Lesson learned for later. After the first coat dried, everything got sanded with steel wool to knock down the raised grain, and a second coat finished it off. 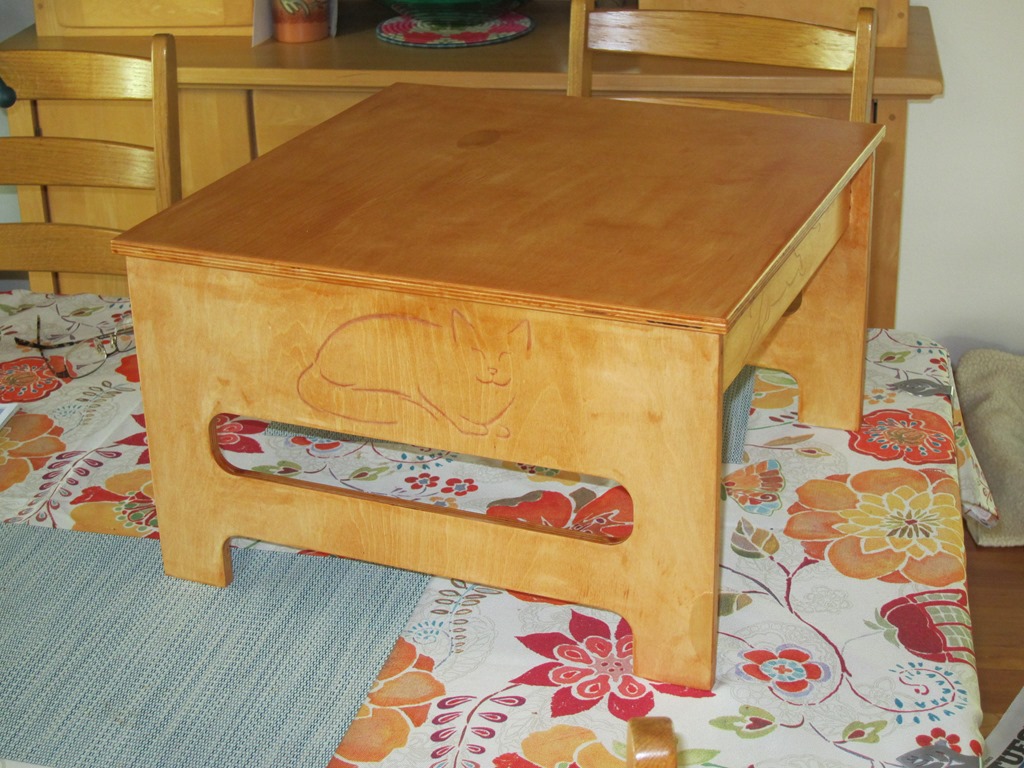 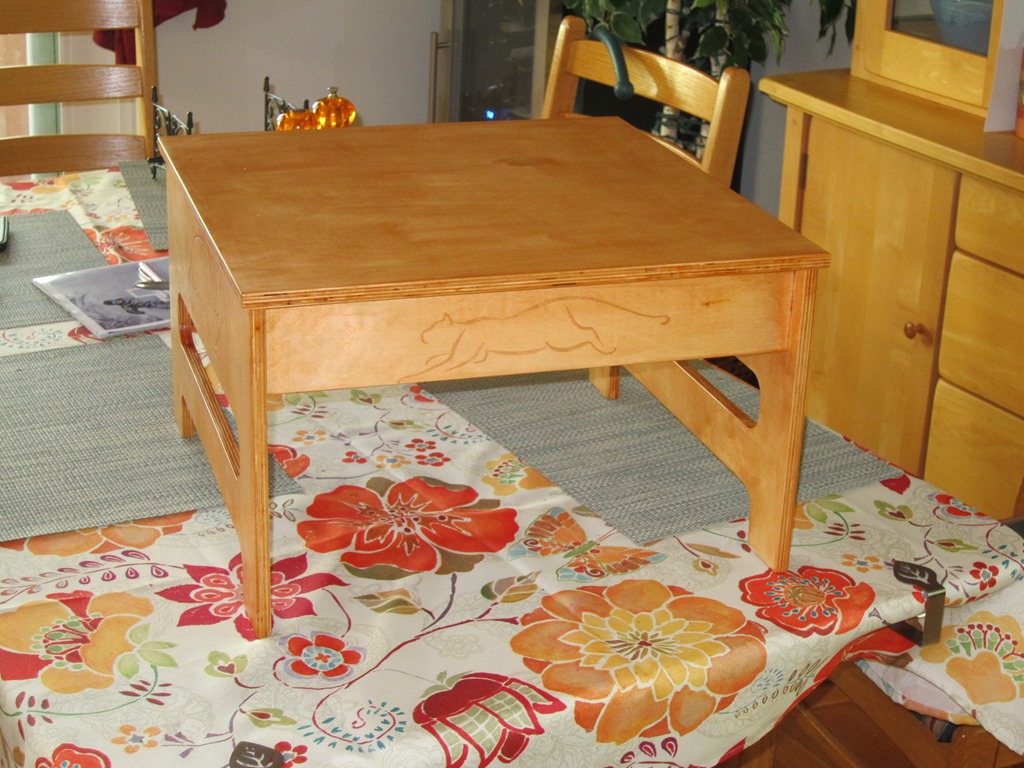 And an action photo: 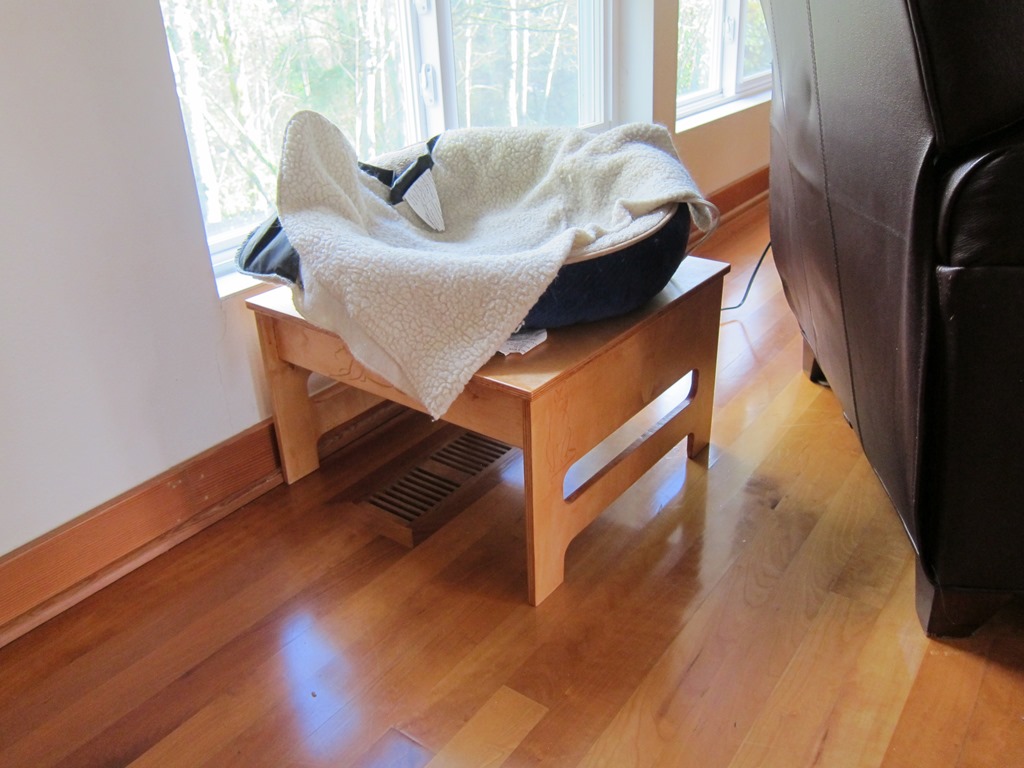 As I have not obtained a model release from the cat I am contractually unable to show photos of her in the bed.

I have a decent DeWalt compound meter saw next to my garage; it lives next to my table saw on a stand like this:

The stand is nice a rigid and easy to take places, which is nice. It does have a few issues:

I’ve been playing with some ideas on how I might build something in my second shaper origin project, and here’s what I have so far. 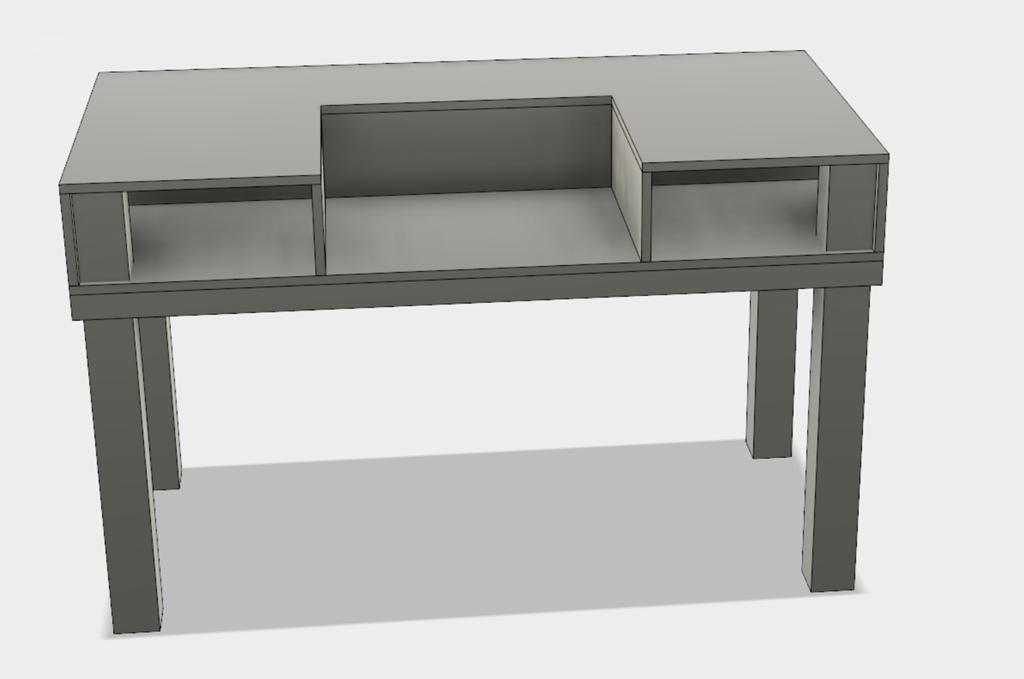 It’s drawn to use 18mm baltic birch plywood. The drawing is pretty rough; no connection tabs, no holes, just a bunch of rectangular solids so far.

I spent a bit of time tuning all of the joints, cleaning out the dog bones so that they would look nice, and doing an overall sanding of all the plywood. Then it was on to gluing. This was done in sections so that it could be easily clamped together: 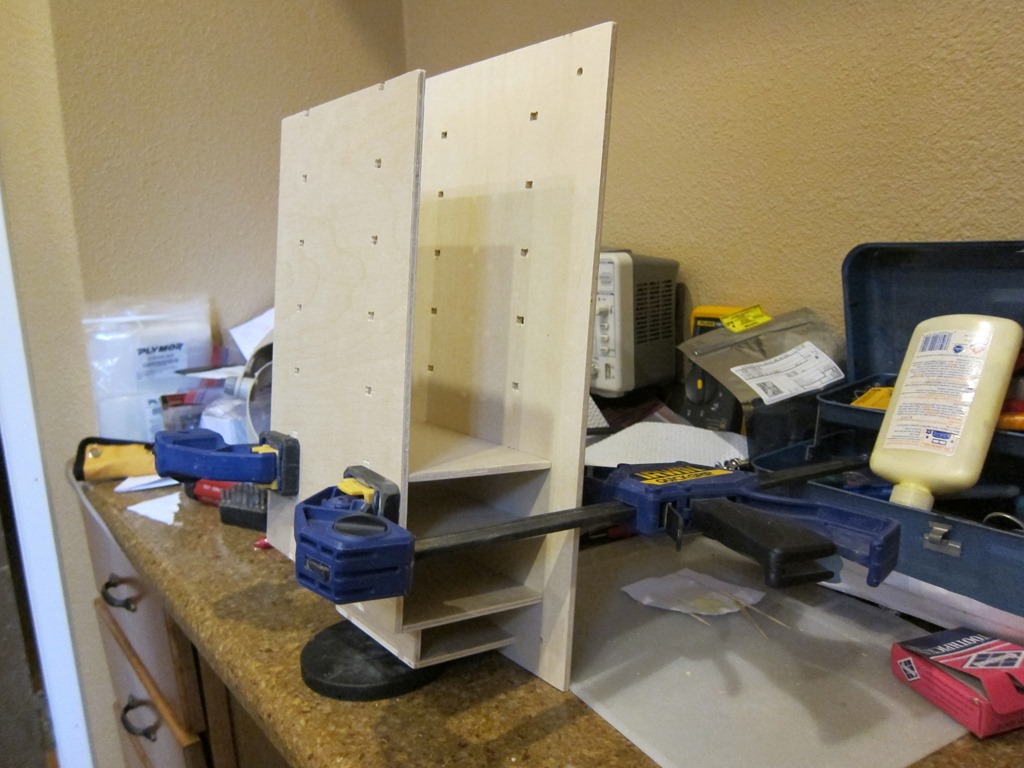 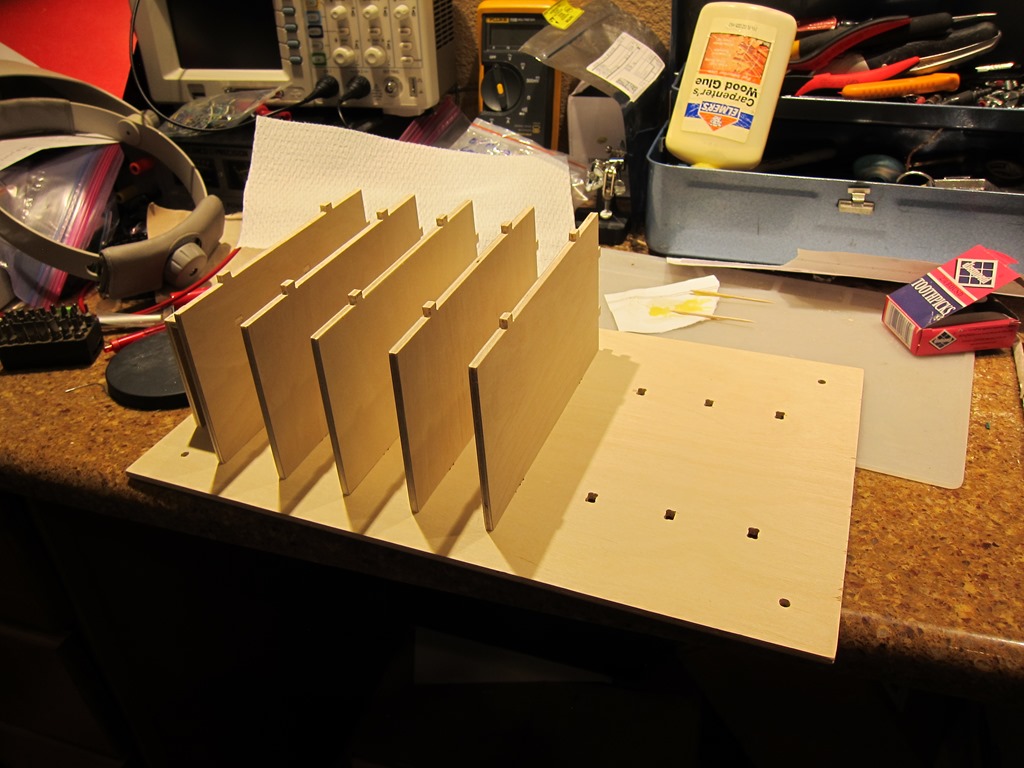 The top and back had to be glued all at once, and then clamped. I used a lot of clamps

Finishing was next. I decided to use a water-based polyurethane that I already had: 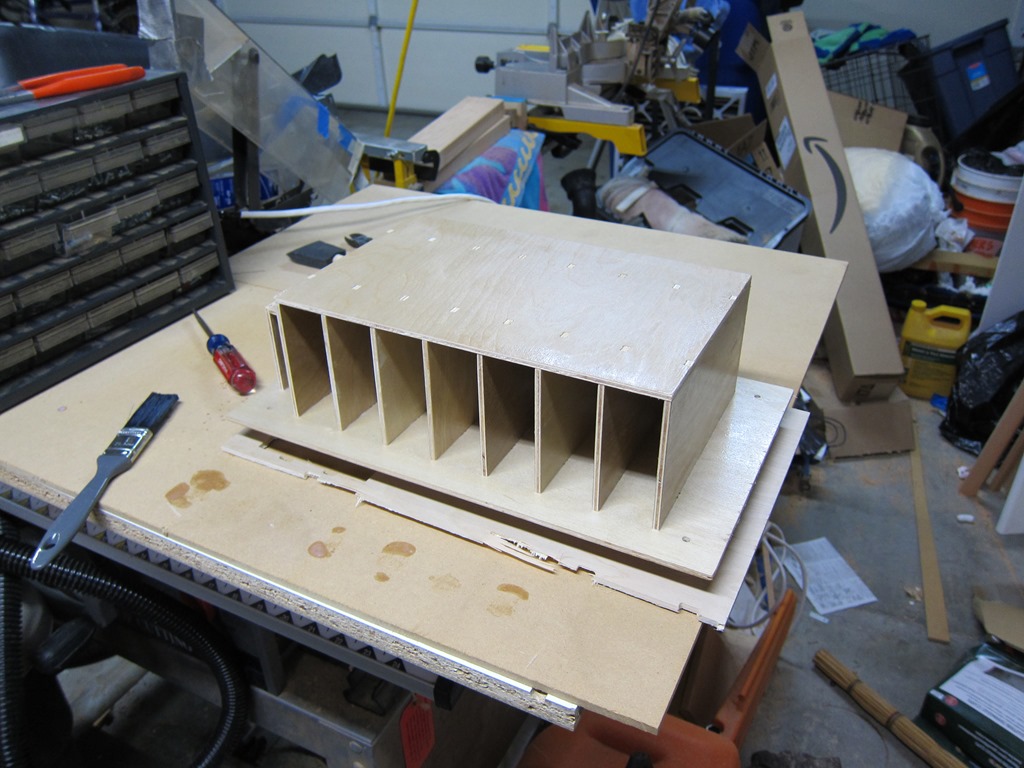 If you look closely, you will see the base hovering above the platform. I build a little stand using the incorrect base piece I built earlier and some standoffs made of machine screws and nuts. That way, I could finish the bottom, flip it over, and finish the parts of the top that were not done. Finishing the inside of the cubbies was a significant pain in the butt.

After the finish dried, I sanded down the raised grain that water-based poly gives you and then put on… well, I was going to put on a second coat and then realized that I didn’t need the protection, so I called the finishing done.

I wanted to have some padding for the cubbies to help hold the devices in, so I bought some felt at the fabric store. The pieces needed to be cut into simple rectangles – which would have been pretty easy to do with an x-acto knife, but when you have a laser cutter hanging out under the garage, there’s an easier way. 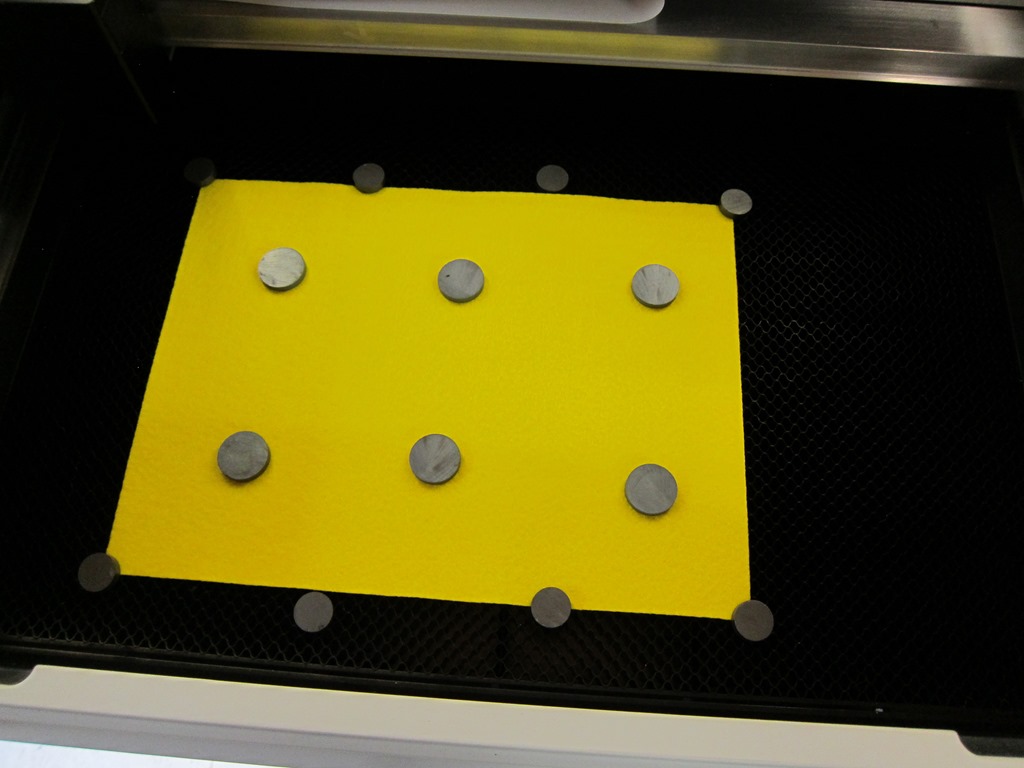 Felt is pretty light and the laser cutter has air assist to clear away the smoke from the cutting, so you need to hold it down. The magnets are carefully aligned so they don’t overlap any of the cuts. 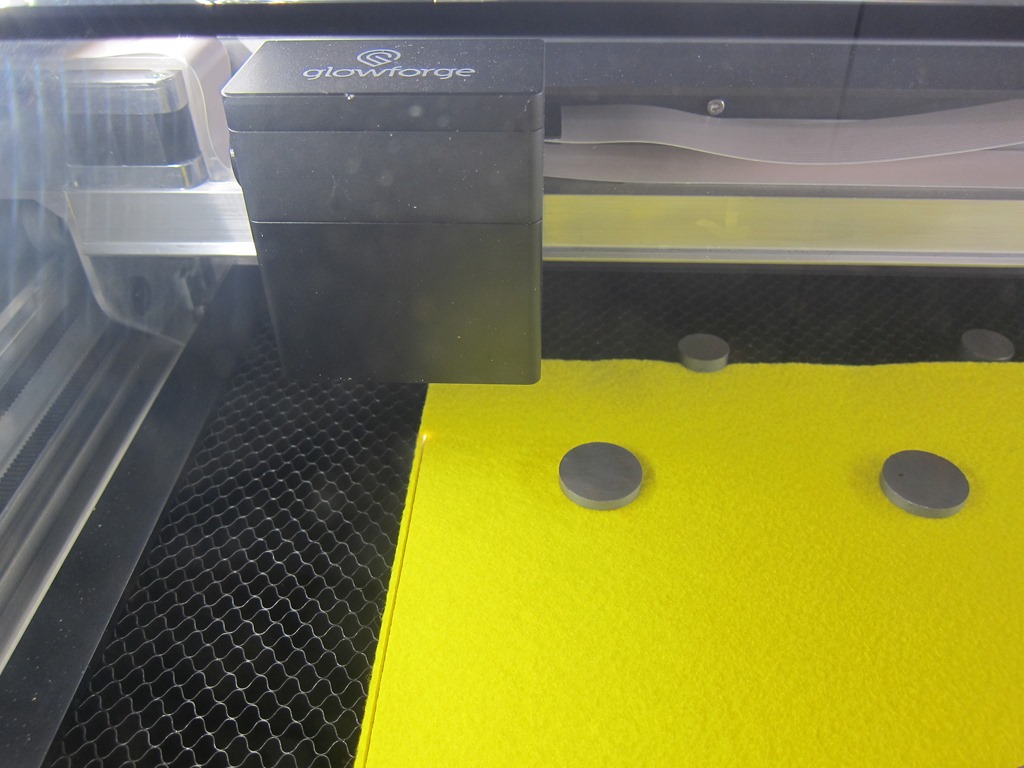 An action shot of the cut. 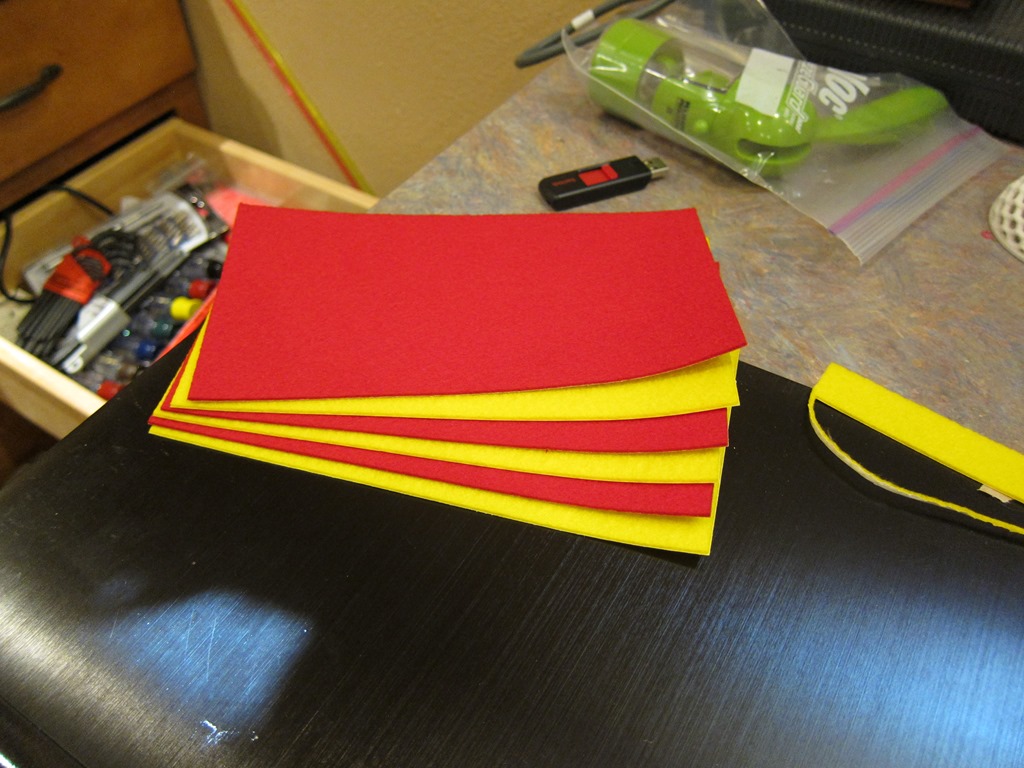 And the result. Somewhat surprising to me, there was absolutely no charring at all on the felt; it looks like it was just cut with a very accurate knife. 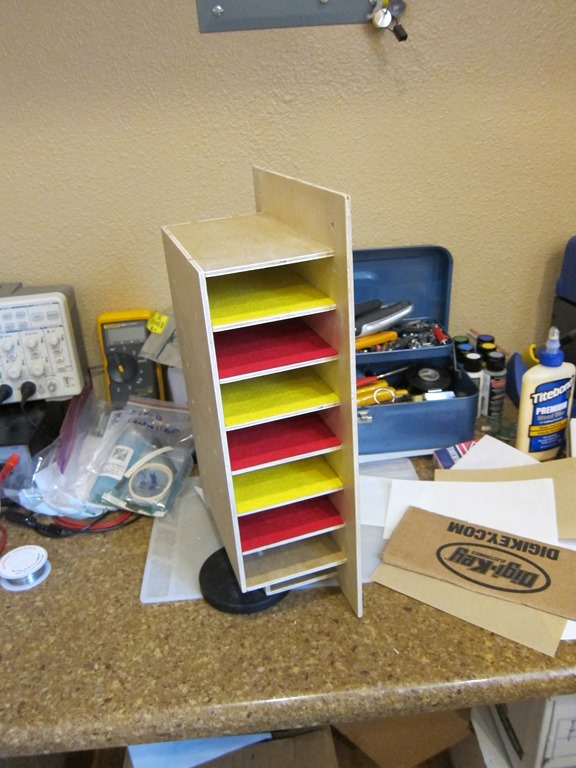 And here we are with the felt installed. There is no felt in the bottom since that part is just a pass-through for the cables (yes, it could have been more elegant). Putting the felt in was *interesting*. I’d peel of the backing, put it adhesive-side up on the appropriately-sized piece of cardboard from a Digi-Key box, and then, with the unit upside down, carefully lift it up to align the felt with the edge, and then press it down. It worked pretty well. 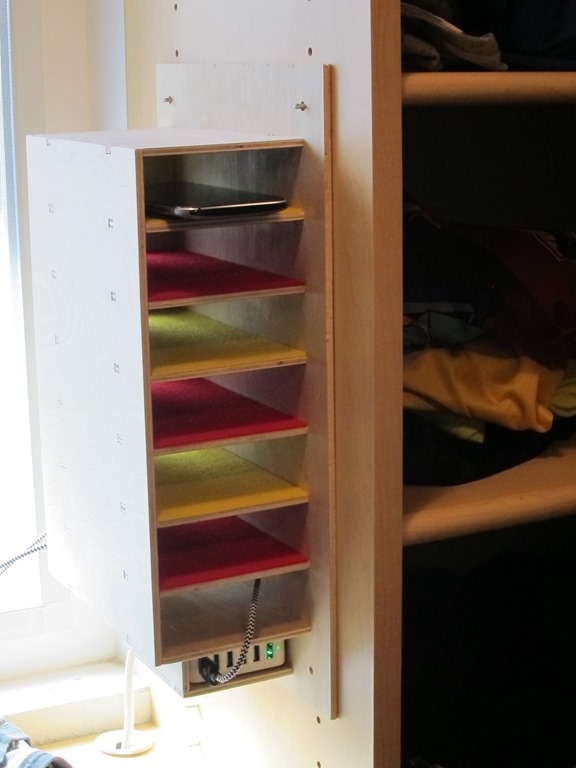 And finally, it was time for installation. The first shelf peg fit perfectly, the second one was offset by a bit, which means my measurements were off a bit. I enlarged the holes and it was fine. The bottom holes… well, they were off by about 1/4 inch. Which is a bit embarrassing. I did a bit of modification to two of the shelf pins with a grinding wheel in my Dremel to make the cylindrical part a bit longer so they would stick farther into the shelve, drilled a hole through the shelf below to add a grommet, and installed the hub. Here you see it charging my cell phone. I bought some more cables to use but they’re currently all in use for another project, so that’s why there is only one device.

Overall, I’m pretty happy about it; the project looks decent (if you like through-tab designs; I could have done a hidden tab design but chose not to for my first project) and I learned a lot about how to do the design and how to use the Shaper Origin.