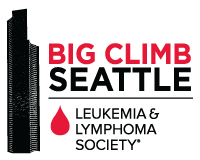 That’s not really true. It – where “it” is climbing up Seattle’s tallest building – had seemed like a moderately stupid thing to do.. That was why I signed up. Everybody should do something in their life that is, to the general population, more than a little stupid.

I’ve done a bunch of these on my bicycle, but given the limited amount of time I have to train and my constitutional laziness, I’ve pretty much maxed out what I can do there with moving into “really stupid”.

This event, however, seemed like the right amount of something different. Climbing up stairs is a little like climbing a hill on a bike, especially if you stand up on the bike. I regularly double-step run up the stairways I encounter during the day, and last summer when we did a cave tour in Idaho, I did 400-some stairs, all doubled. Seems like I could do 1311 stairs at once, and 788’ of vertical doesn’t seem like a lot; I’ve done 10x that in one day on the bike.

That sort of overconfidence is part of what makes it stupid, as is overlooking the fact that I won’t be in good shape in April. So, I signed up, joining a team organized by somebody who works at my company.

I’m cranky. This was expected; in virtually every event I do, I get 75% done, and I get cranky. My pace is designed  – to the extent that I could plan for an event I’d never done – to make the effort not be too sucky, but a) it’s hard enough to pick a good pace when you don’t understand what the event will be like, and 2) hard efforts always hurt. My legs are getting shaky and I am no longer doing doubles. The numbers keep (slowly) counting up, and I start to feel a bit better. I pass a few people – there’s nothing like the suffering of others to make you feel better – and finally, I am on the last flight. Just a few more stairs, and…

“I’m going out to run some errands.What do you want for lunch?”

“Whatever. If you can wait for me to finish, I’ll go with you.”

“What are you writing?”

“I’m pre-writing my report for the Big Climb. It’s easier if you have a script”

“Hmm. Aren’t you going to find it hard to climb 69 flights of stairs while at the same time skiing in Montana?”

Crap. I signed up for the climb in the fall and forgot about it when setting up our ski trip.

Now, one could argue that signing up for an event and then scheduling another activity 500 miles away on the same day is a wonderful example of “stupid”, and I would not be one to disagree, but it wasn’t the kind of stupid that I was looking for. That kind of stupid I did every day. Friends had sponsored me for the climb, and, while it was for a good cause, I knew that if I pressed them, they would admit that their real goal was to see me suffer. And I felt obliged to satisfy them. But this was our first ski vacation in 7 years, and it wasn’t really feasible to move it around.

I couldn’t be in two places at once, but perhaps I could suffer in some equivalent way…

It’s April 14th. The weather looks kindof sunny at 7AM; it may rain, but it probably won’t be much, unless there are thunderstorms, in which case we’ll probably get hail like yesterday. And it’s 37 degrees. Welcome to springtime in Washington.

I had hoped to get by with arm and leg warmers, but it’s too cold for that. I don a long-sleeved base layer, jersey, winter jacket on top, shorts and winter pants on the bottom, and feet with neopreme booties on my feet. I carry some lighter clothes in case it warms up, a light shell in case it rains, bottles of accelerade mix and Nuun, and a baggie of triscuits. Given my current weight, I’m guess Eric + bike = 210 pounds or so.  I head out of the house around 8AM.

The prologue takes me to the beginning of the event; it’s a time to stretch my legs a bit and try to get warmed up. I’m not as cold as I expected to be, but on the downhill, my face tells me that, yes, it is in the 30s. I’m feeling okay. My legs are a big sluggish after hard rides on Tuesday and Thursday.

I turn on my nano, and hear the following:

which seemed like a perfectly descriptive description of what was to come. Except for the snow and losing control part. There is, AFAIK, no official name for these stairs, but they are on the west side of Marymoor and near a park named “West side park”, so I’ve chosen an obvious name.

There is space to roll your bike next to you while you climb, so that’s what I decide to do. The stairs are made our of wood, and the sections between them are also sloped, so you’re both walking up hill and climbing steps at the same time. There are, however, only 76 of them, so they go by pretty quickly. I top out, and get back on the bike.

I am now on the first Portage (rhymes with “triage”) section of the event. After a somewhat painful climb out of the neighborhood, I wind my way into Redmond and take Willows road to the North. I have a bit of hydration on the way there. Another small set of stairs, this are hidden up just south of where the Pro Sports Club Willows location is. They are made out of steel, and are a bit hard to climb with my cleats (SPD-SLs, if you wish to keep track) because the stairs have the metal on edge. I put my bike on my right shoulder, and climb on up. I try to do doubles (two stairs at once) but end up running out of breath, so I slow down to singles.

Another steep climb out of the neighborhood, and a bit of tootling around puts me on 132nd, heading north. I work my way west, under 405, and towards the next climb.

Our next climb is a set of wood stairs that look nice from the bottom. Looks, however, are deceiving; they aren’t terribly regular, sometimes tilt left or right, and sometimes have puddles in the middle of the flat parts. I pass a couple coming down with a dog on these. I carry my bike on my left shoulder this time.

Happily, not a steep climb at the end, but some flat and then a nice gradual descent, and a quick section, which takes us to…

Yes, up the same set of stairs again. Apparently, the organizers needed a bit of additional elevation, and these were the easiest to do twice. The climb is just like the last time; I get out of breath, the puddles are still there, and I meet a couple coming down with their dog. I think that it is a different couple, but I’m not sure.  I carry my bike on my right shoulder. I have a short piece of foam pipe insulation on the top tube, and that is helping protect my shoulder.

By far the longest one of the day, this takes me from the top of Market hill in Kirkland all the way to the Mercer Island business district. This involved a couple of actual hills, which I haven’t been riding up today so far. My legs feel okay, but I’m a bit tired, so I have some more triscuits and nutrition drink along the way. I’d always wondered why the Mercer Island business area is so concentrated in one part, and when I rode through it today I realize that it’s down in a bit of a hollow, doesn’t have any views, and therefore the land was cheap compared to the areas with views. There are a bunch of different stairs here; this section has the most elevation gain.

They look so nice when you approach them, with a nice grassy lawn and nice guardrails. Don’t get complacent; not only is this the biggest climb of the event, it has the most challenging stairs. It is really hard to get into a rhythm on these stairs; they will have 4 stairs, then a flat spot, then 2 stairs, a flat spot, etc. Sometimes the rise is 7”, sometimes the dirt has washed out a bit and it’s 10”. I have one incident where I whack my toe on an extra-high stair and almost manage to trip. There’s no real way to double these, so I just walk them up. Inexplicably, there is typically one guardrail on the end of the step, and the other is about 3/4 of the way towards the other end.

The weather has finally warmed up, all the way into the mid 40s, and I’m hot and sweaty. If I was smart, I would have done this at the bottom of the climb, but I wasn’t, so I stop to switch from fleece hat to headband and from full gloves to lightweight ones. The official route here follows the I-90 trail back to the east, but I recommend using the traditional north island bike route instead of the main route. I had one close call on this section; as I’m approach a sport where people are waiting for the bus (and riding on the sidewalk because that’s where the trail is here), a guy walk out towards the curb looking down at his briefcase.

Back over the bridge to the mainland, and then a quick few miles to the start of the last climb. Note that the indicated route has some gravel path to ride on; I felt okay on my 700x25mm tires, but thinner ones might be a handfull.

Not only are these the last stairs, they are the best ones of the day. They are made of wood, but with a very consistent spacing and small landings when they need one. They can easily be doubled if you have the legs for that. I walk up the last flight, take a small path up to the street, and I’m done.

The epilogue takes us back to our starting point. It start with a nice steep 12% climb, and then brings us back to 140th in Bellevue, and from there, it’s a familiar route to finish.  I have a bottle of Endurox, take a shower, and head to Qdoba for lunch.

I’m pretty happy overall. I felt strong most of the way, though I did go anaerobic on every one of the climbs and had to slow down a bit. I did this on a lark, but I might choose to do it again.

Here are some stats: