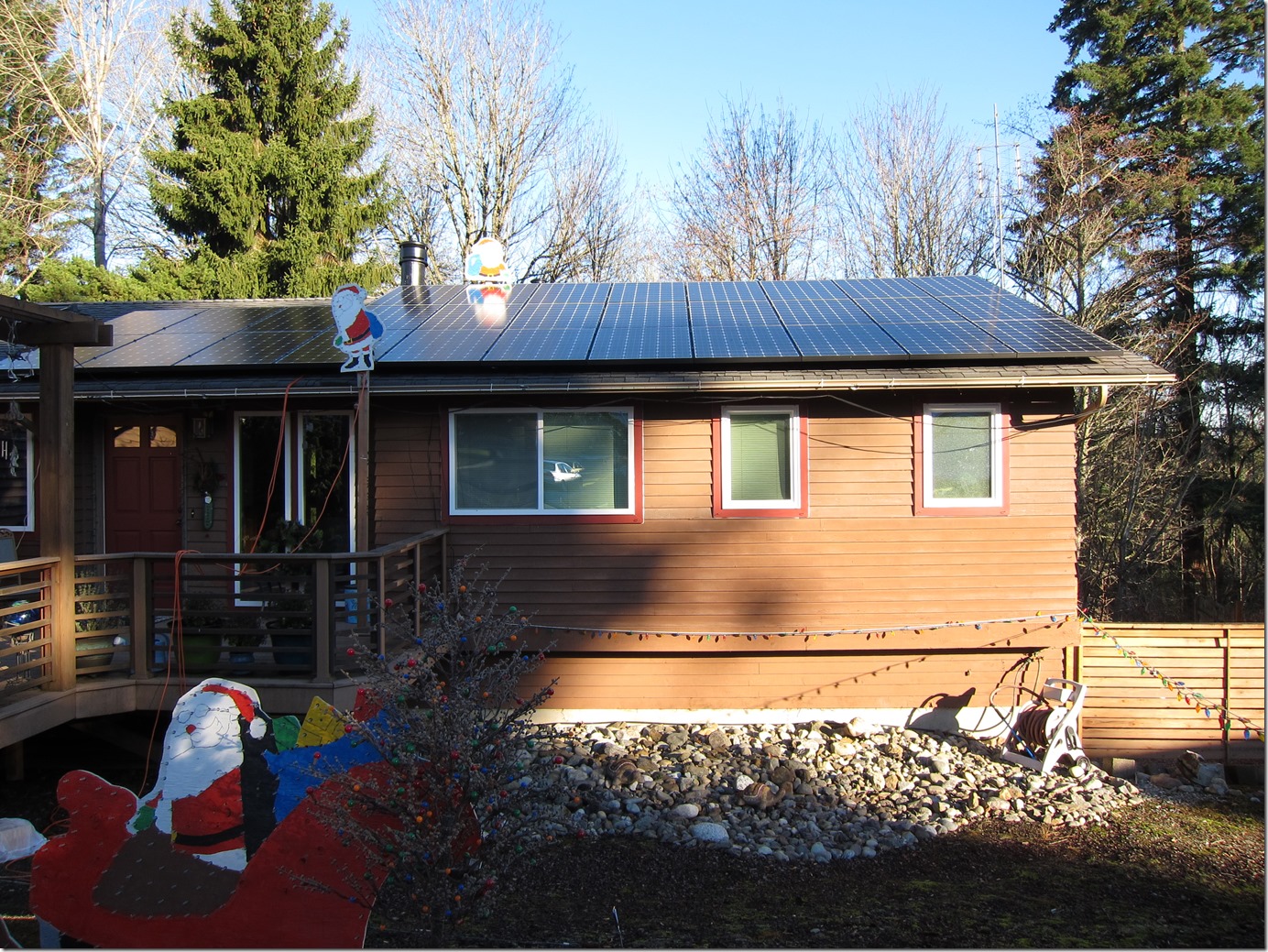 We had a photovoltaic (aka solar cell) system installed on our house in mid-November, and I’ve had a few questions about it, so I thought I’d write something about it.

We got started through the Solarize Bellevue program, a city program designed to make it more straightforward for homeowners to install photovoltaic (PV) systems. The program provides a few things:

I don’t know whether the program is going to repeat in 2016 or not, but if it does, I recommend it.

The solar system consists of the following equipment: 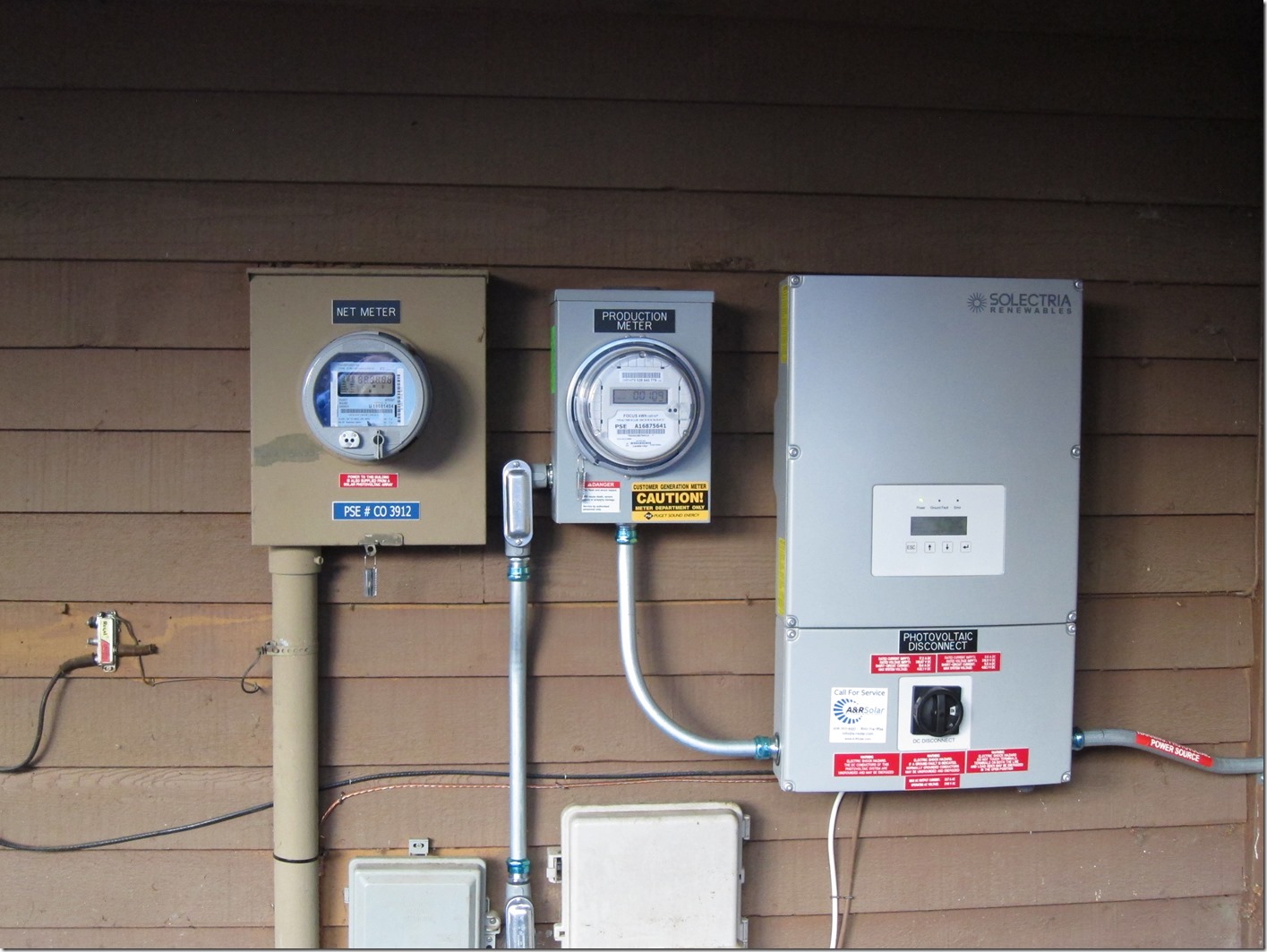 There are a number of different incentives at play that make the monetary aspect complex. I will try to make it simple.

Systems that are 10 KW or less have no sales tax. AFAICT, those that cost more get some sales tax forgiveness.

This is very nice, but it’s mostly hidden, since you are going to have to remember that it allows you to pay $20K for a system instead of $22K if you do payback calculations.

This is a federal tax credit worth 30% of the installed price of the system until 2019, with reductions in years after that.

Note that this is a tax *credit*, not a deduction, so it comes straight off of your tax bill.

With production incentives, you get paid by the utility for every KWh that your system produces – regardless of whether you use it or send it back out to the grid. That sounds pretty straightforward. Let’s add some complexity:

However, it gets more complex than that. The production incentives are paid from a pool that is 0.5% of the taxable power sales by the utility that serves you. The size of the pool varies based on how much power the utility sells for a year, and the number of people who are participating in the program and how much power they make. Last year’s bad winter meant less power to sell and there were lots of new systems, and for Puget Sound Energy customers at least, the rate is no longer $0.54.

So, the real answer is that you need to talk with your utility and they will give you some idea of what rate you might receive for the coming year. Puget Sound Energy projects $0.36 – $0.468 per KWh for the coming season.

Net metering is very simple. If you are producing more power than you are consuming, you sell the excess back into the grid at your current rate.

Details of our system

Our installer is A&R solar, and we were quite happy with their service.

Our payback was originally calculated at 4.4 years at the $0.54/KWh production incentive. It’s obviously worse with lower rates. A quick look at the numbers says the payback is about 8 years at the $0.486 rate and 12 years at the $0.36 rate. This assumes that the production credit goes away in 2020 and does not come back.

One of the nice things about the agreement between the city and our installer is the inclusion of the eGauge monitoring system as a free bonus. This gives real-time monitoring of the amount of power the panels are producing and how much is being used by the house. It does nice graphs like this: 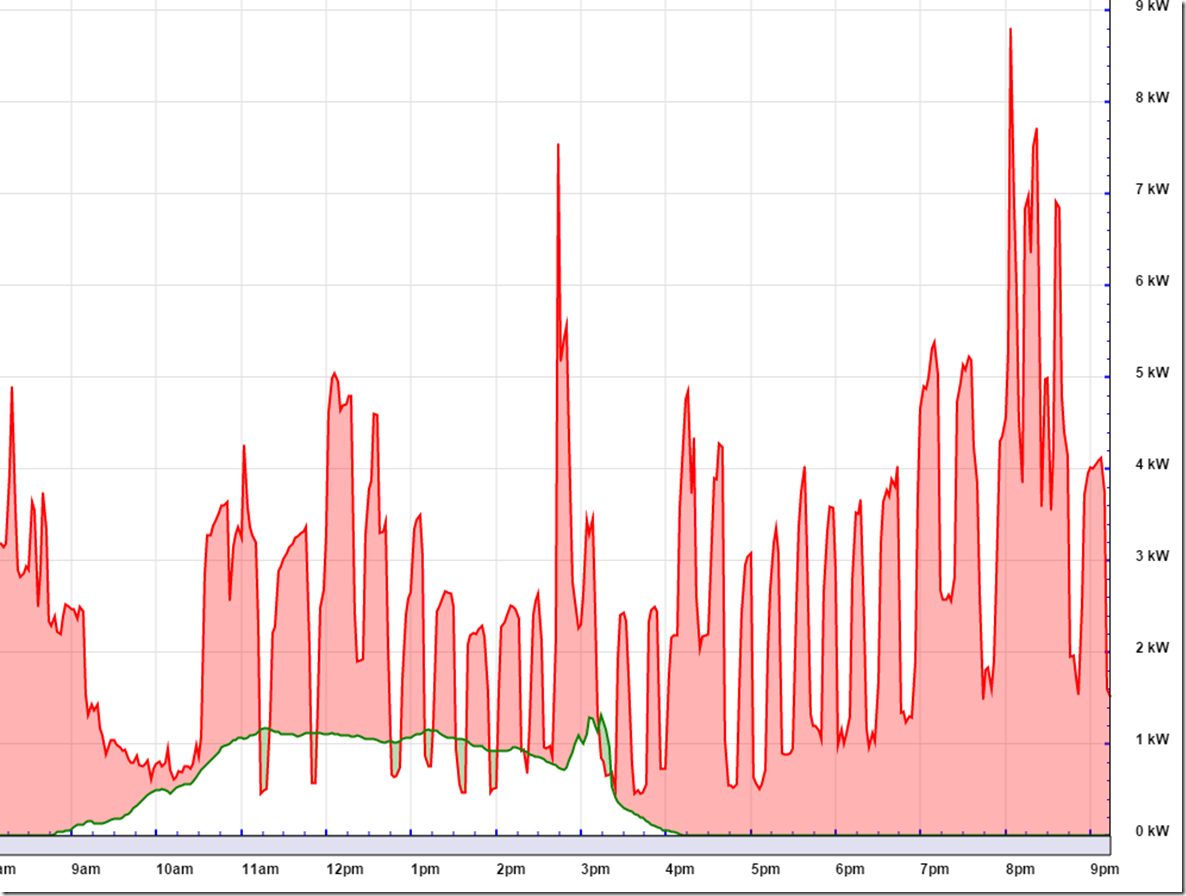 Okay, so it’s December 29th, which is one of the shortest days of the year, and though it was light for December, it wasn’t really very sunny, and the sun is low in the sky. The green line is the power produced by the panels today; not surprisingly, it doesn’t really peak that high. The peaks around 2KW are the heat pump switching on and off, and the really high ones are both the heat pump and the dryer.

A few details that I think might be of interest.

The main panels face pretty much due west on a roof with a 1/4 pitch. This is not an optimal placement or orientation, but the installation – which is flat on the roof plane – is simpler, cheaper, and looks better than the alternatives.

The most-commonly-asked question is “can you use your system during power outages?”. The answer with the current system is “no” – as a safety measure, the grid-tied inverters only work when there is power coming in from the utility. There are solar solutions that provide this capability, but they cost more $$$.  There are also ways to trick your inverter with a small inverter driven off a battery; the actual implementation of that approach is left as an exercise for the readers. Note that there is from 200 volts to 500 volts DC coming into the system, which is a pretty dangerous voltage.