One of the points of the expander is to be able to drive bigger loads than the 18mA that the WS2811 gives you directly. Much bigger loads.

To do that, I needed something that would stress the system, and I needed to verify that the design worked with 12V.

First off, I needed to cut a new stencil uses the paste layer: 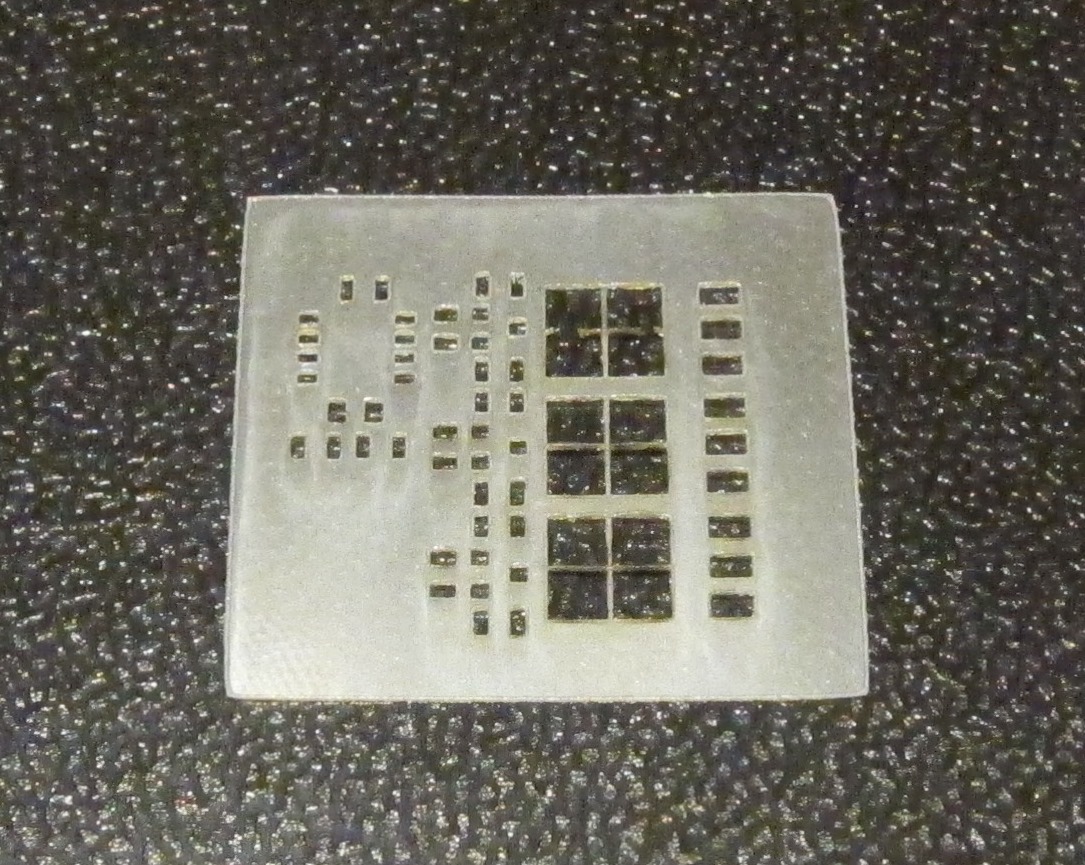 That’s a bit nicer than the first one; there is adequate spacing between the pads this time.

Aligned it on the board, applied paste & components, and reflowed it. Here’s the result, still warm from the oven: 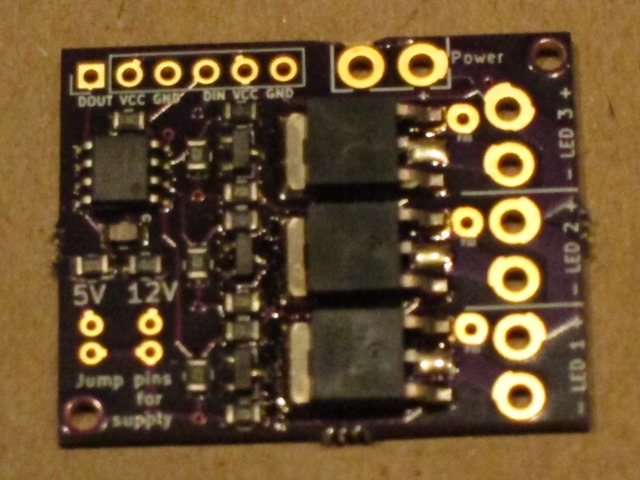 All the components self-aligned nicely, no bridges, no missing wires. Perfect.

The only thing I need to do is get rid of the center pad for the MOSFETs, since they don’t actually have a center pin.

How to test it?

Well, I dug through my boxes and found a 5 meter length of 12V LED strip. It says that will be 25 watts. I hooked it up and verified that all 3 output channels are working. It’s running an animation that ramps from 0 to 255 over 2 seconds, holds for 2 seconds, and ramps down for 2 seconds. I chose that because the quick switching is the hardest for the MOSFET to deal with from a heat perspective.

But 2 amps isn’t quite enough. I dug out a 12V power supply that claims it can do 6 amps and hooked it up to one output channel: 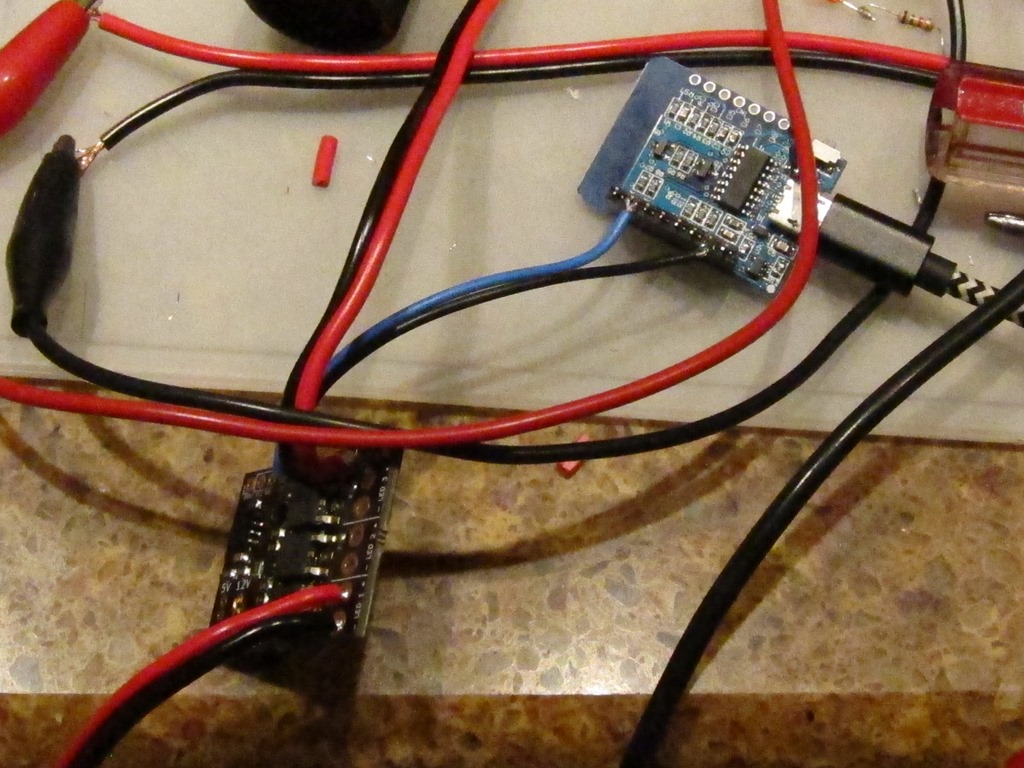 More load, more load, more load. I want something that soaks up the 12V. Incandescent car bulbs are nice but I don’t have any handy. But I do have an extra heated bed for my 3d printer; it’s a nice 6” x 6” pc board. Hooked that up in parallel with the lights: 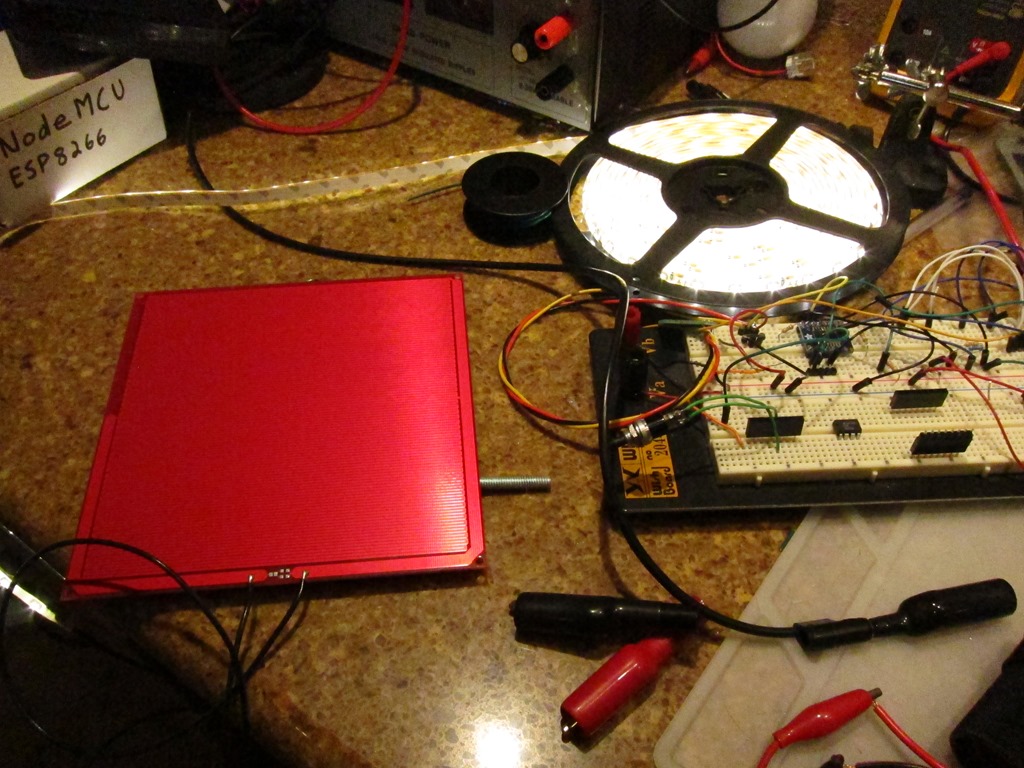 This worked just fine. The board heated up to about 170 degrees, the lights worked fine, and the MOSFET on the driving board just *barely* heats up. My measurements show that it’s switching about 5 amps of current.

The only one that’s not happy is my cheap power supply, which is putting out a nice 10Khz (ish) whine when under load.

I switched over to run it on all the time to see how that affected things. After 10 minutes, the board is up to about 110 degrees, the printer bed is up to 240 degrees, and the 12V power supply is 125 degrees.

I think I’m going to rate it at 6 amps total; that gives a lot of margin, and frankly 70 watts is quite a lot of power for this application.