The endurance athlete’s guide to fueling and weight loss part 3: Carbohydrate and Fat use in actual athletes…

Please read the introduction and earlier posts if you haven’t…

After two posts of biochemistry, we will *finally* get into some real-world stuff in this post. Thank you for your patience; this is where it gets interesting…

My goal in this post is to talk about what carbohydrate and fat usage looks like in real athletes. How do we do that? Well, luckily the chemistry that is in play when burning glucose (glycolosis) and burning fat (beta oxidation) is different, and it turns out that the amount of carbon dioxide produced for a given amount of oxygen differs between the two. That is expressed as a number known as the “respiratory quotient”.

And, if she is on an exercise bike, we can also figure out how much power she is producing, so we can correlate that to the fat and glucose percentages. The setup looks like this, and is commonly done as part of a VO2Max test. 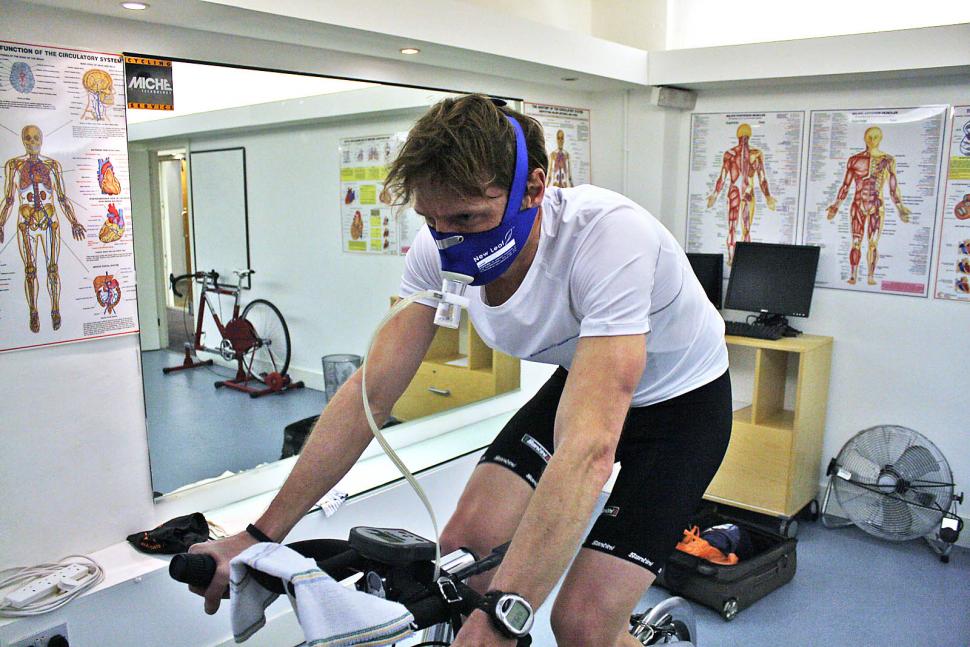 Fat and Carbohydrate burn versus intensity

This chart says that we burn mostly fat at low intensities, and as the intensity goes up, the percentage of energy from fat goes down and carbohydrate (CHO) goes up. I’ve seen this chart in countless places. And I’ve seen passionate arguments about where you should set your intensity to get the best fat burn; does lower fat burn percentage at a higher intensity burn more fat? etc. etc.

The problem is that this graph is… well, I was going to say it was an idealized model, but I think the term “absolute fabrication” is more correct.  I spent some time tracking down where it came from once, and I think it might have come from a misunderstanding around this article, but it does not reflect reality for pretty much anybody. So any conclusions we might draw from a graph like this will not be worth much.

You might remember in the introduction I talked about being confused by the fact that some endurance athletes carry a lot of extra fat? It was confusion partly driven by this graph; if the graph were true, long bicycle rides at, say, 50% intensity would be great at fat burning for everybody, and we’d expect cycling would make it *easy* for people to lose weight. Right?

So, what do we really see, with actual athletes? 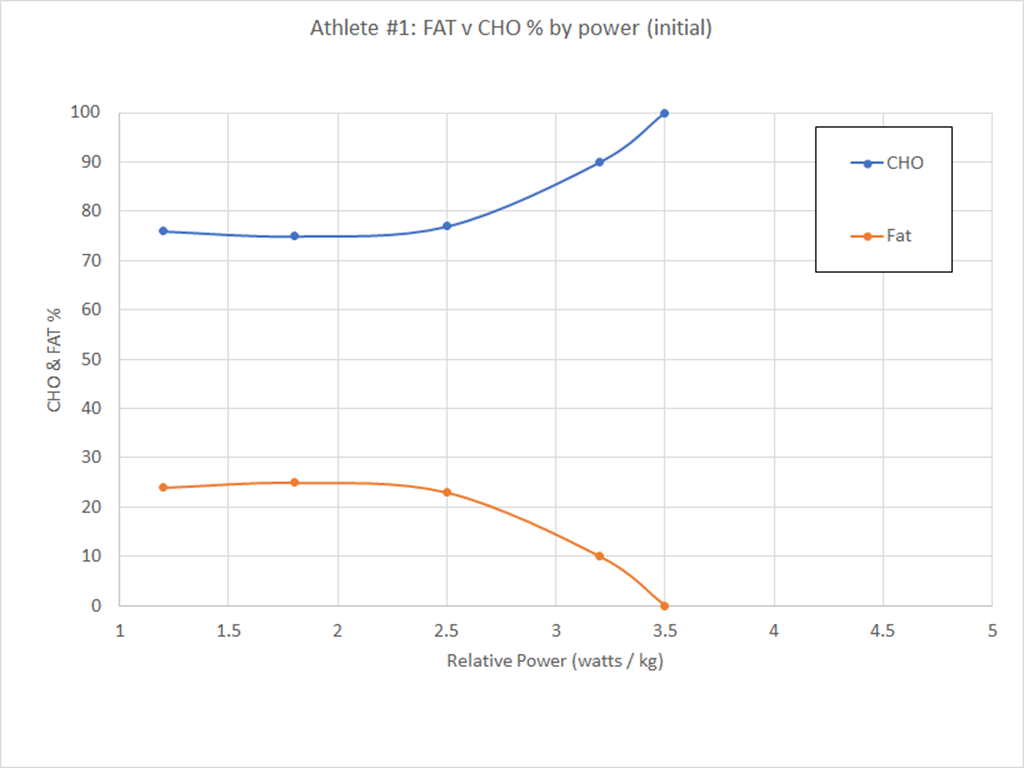 The respiratory quotient is calculated at different points during the test, and then the percentage of power from fat and glucose (labelled “CHO” for carbohydrate) is calculated for each point. The amount of power produced is converted to a watts / kg measure using the rider’s weight.

What can we tell from this graph? Well, even in the best conditions for burning fat – after a fast – this athlete doesn’t get more than 25% of his power from the beta oxidation of fat. Even at low intensities, he is getting 75% of his energy from the glycolysis of glucose. I call this pattern “Carb optimized”; great at burning carbs, poor at burning fat.

What causes this pattern? Well, I’ll get more into that later, but as a hint, the source noted that this athlete had a “sweet tooth” and regularly consumed high amounts of refined sugary foods.

What impact does the heavy reliance on carbohydrates for energy have on this athlete?

Even at a very moderate intensity, this rider is going to run out of stored glycogen in only about 4 hours (note 3). And then bonk. Having bonked as a high-carb athlete, I can tell you that it is no fun; you lose the majority of your power. Which is no surprise at all looking at the graph; this athlete really needs carbs to put out power.

The glycogen depletion will happen faster at higher intensities; not only is the rider burning more calories per hour, he is also burning a higher percentage of glycogen to get those calories. At 250 watts, it’s 675 calories from carbs per hour, which gives a time to depletion of a little over two hours.

Hmm. Those studies are all linked from – and many are funded by – a company who’s business model is selling flavored sugar water in many and varied forms. The same business model used by most companies that make sports nutrition products. So you’ll forgive me if perhaps I venture to mention that maybe – just maybe – things are a bit more complicated than that.

Keep that thought in the back of your head.

If you do long events, you may have found out that carbohydrate supplementation can cause issues:

I’ll use myself as an example. I used to be a low-fat diet carbs before/during/after cyclist, and I followed that advice religiously; even my short 25 mile rides had carbs during and after. Let’s have some fun with some of my data from that period…

(Author’s note: it turns out I used RAMROD data that did not include power data, so the calorie values are likely inflated by about 25%. I will correct it with better data when I get a chance; I do not think it changes the overall message of this section)

What can we do with this data? I charted my actual energy use by minute based on the recorded data, and it’s straight enough that a linear plot works fine, so I’m just going to say that I burned 5220 / 9.9 = 527 calories per hour (I’m using kj but when you factor in conversion and efficiency factors they are pretty much equal to calories).

If we look at both liver and muscle glycogen, I had something like 2000 calories in glycogen reserves. I’m a relatively tall guy with more than average muscle mass for a cyclist, so maybe it’s a bit more, but something in that range. If we assume that I’m getting 75% of my calories from carbs – that I look like athlete #1 – that would mean I’m burning 450 calories of glycogen per hour.

This is a bit too optimistic… Muscle glycogen is allocated to individual muscles rather than sharable, so any glycogen in my arms, chest, or any other under-utilized muscles doesn’t keep my quads and calves from running out of glycogen. I don’t carry a lot of non-cycling muscle, so I’m going to make a guess that 25% of my muscle glycogen is in muscles that I’m not really using for the ride – or if I am using them, it’s not actually going to physically moving the bike forward. That would drop me down to 1600 calories in my glycogen stores, and 1600 / 450 = 3.6 hours.

I normally targeted 200-300 calories per hour while riding.

With all that in mind, what do my glycogen reserves look like during the ride? 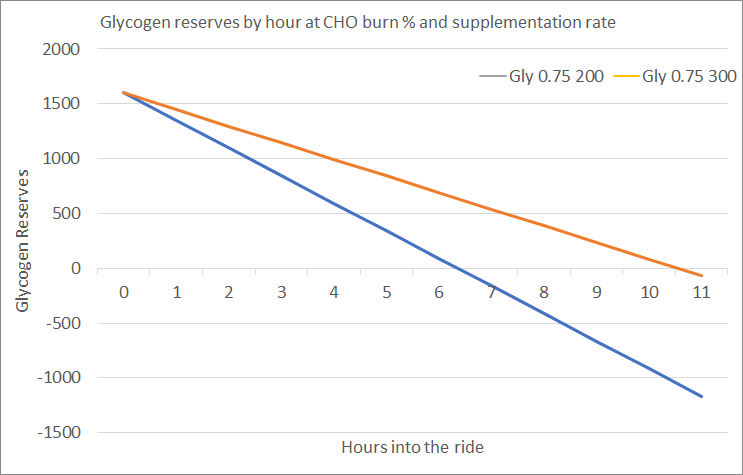 Hmm. It turns out that in RAMROD I would feel fine on the first 3000’ climb, but when I got to the second climb – at 92 miles and roughly 7 hours in – I was pretty sure to be a) feeling weak and b) feeling a bit sick to my stomach. Not really what you want when you have 3250’ of climbing in front of you, often in the summer sun and heat. And after being off the bike for an hour at the deli stop at 120 miles after that climb and getting a lot more food in me, I generally felt quite a bit better.

My assumption was always that I wasn’t well enough trained for a ride this long or hot – both of which are probably true – but from a fueling perspective, if I wasn’t eating enough I was going to be very unhappy. Compounding this is that it’s hard to fuel on a ride with big climbs; I can only eat a little on the climbs or you get sick, and trying to eat is contraindicated on mountain descents at 35 MPH.

What does all this mean?

Back to the data. Here’s a second athlete: 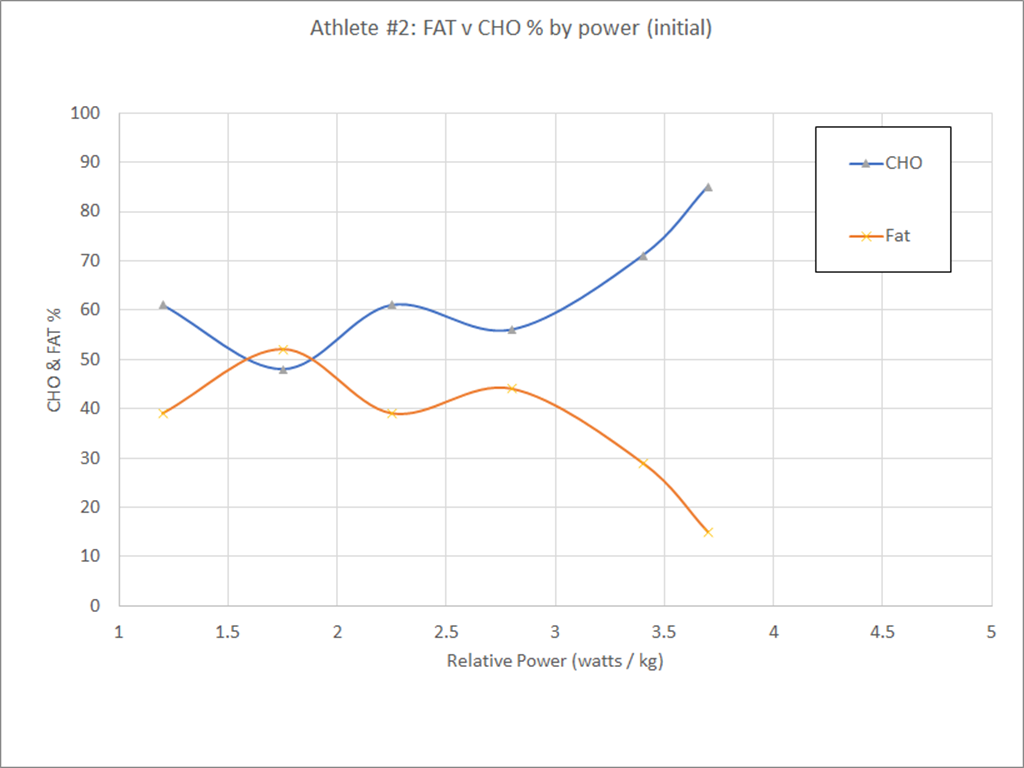 Note that this athlete manages to get 40-50% of his power from fats up to about 3 watts/kg. What factor or factors do you think accounts for the difference in fat burning between these two athletes? Write down what you think is the cause, and I’ll continue in the next post.