I have recently updated my custom late 1990s multi-room music system to the 2010s with the installation of a Chromecast audio in my main equipment system. It is exactly what it should be; easy to use, easy to understand, and cheap.

But I was noticing recently that while it works fine when I’m in our upstairs kitchen/dining/living room area, I don’t have the option elsewhere. What I really wanted was something I could take out to the back patio for a bit of background music. I could have bought any of a number of small chromecast audio speakers, but they all required AC power, and in my stupidity I did not add a convenient outlet near my patio when I redid the basement.

I did some research, but I couldn’t find what I wanted, which was a system that would run either on battery or AC and didn’t have rechargeable batteries. I did some searching and researching, thinking about how I might buy a small boombox system, but the ones I found all used disposable batteries. Then I finally remembered that I already own the basis of such a system.

A DeWalt DC011 Jobsite radio. It is rugged, has an aux input (and a charming CD case on one side), but the really nice part is that you can plug a DeWalt battery pack into the back and not only will it use the battery pack to play the radio, it will also charge it whenever you plug the radio into an AC outlet. And I just happen to have a couple of 9.6 volt packs from a DeWalt drill that I recently deprecated in favor of a nice brushless Makita that I picked up. My radio is much, much dustier than the picture but still works okay, except that the optical encoder for tuning doesn’t really work.

The sound is okay, and I’m not looking for high-fi for this application, so that is fine.

This should be a very simple project; I just need a source of 5 volts to run the chromecast and a place to put it.

Nicely, the front is held on with 8 screws on the front and 2 on the rear, and then it just pops off. I expected it to be cheaply made, but the design is really pretty nice; instead of soldered wires between the boards there are real connectors. The only thing I find curious is that the battery charger is a hefty 4″x5″x1.5″ fully enclosed metal box at the bottom of the case, which explains a bit why the radio is so heavy.

A little bit of snooping has me a bit confused; there are nice red and black wires from the battery to the main board, but where I would expect a power cable to run to the radio, I see a 5-conductor ribbon cable instead. 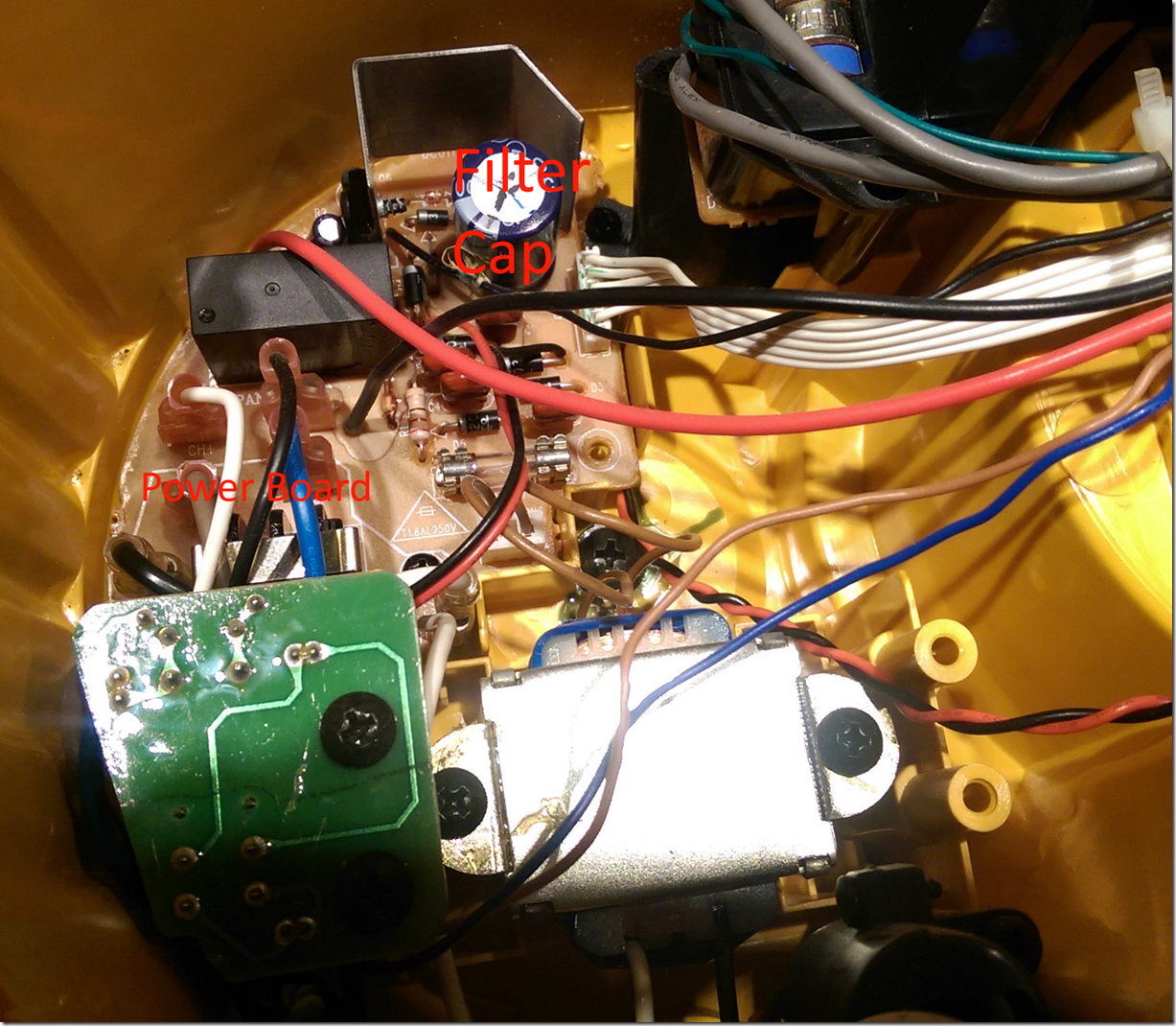 I pull the power supply board and start tracing the back. 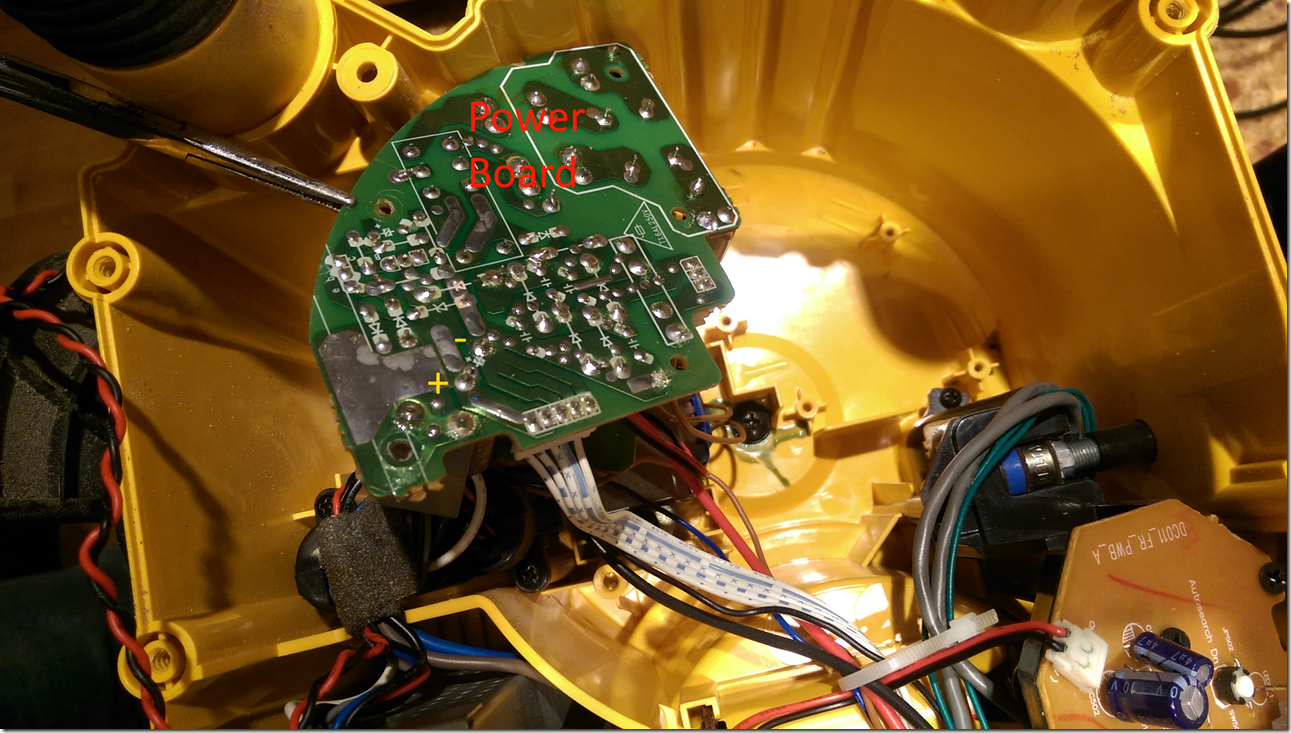 The filter capacitor is very obvious, and it turn out the the 5-conductor ribbon cable *is* the power supply cable; 3 conductors for positive and 2 for negative. A quick check with the meter shows that there is is no power across the filter capacitor, which makes no sense at all.

I look a bit closer, and realize that the whole board has a nice clear conformal coating on it, another sign of the build quality. I scrape it off the leads of the filter capacitor, put my meter on it, and find about 10 volts when on battery power and 14 volts when running on AC. That is a goodly amount of voltage.  I make a little power take-off harness and solder it to the terminals of the filter capacitor, and then reinstall the boards back in.

To get to 5 volts, I go searching. I want a buck converter that gives me 5 volts. The internets say I need around 250 mA, which pretty much any converter will give. There are hundreds of choices, but I settle on one from Xiny:

Like pretty much all of these, it’s made in China, but it appears to have reasonable build quality. I will just need to attach the wires, plug in the USB cable to the chromecast, and then run the audio to the aux.

While waiting for the buck converter, I hook up the Chromecast. I pull the aux jack out of the mount, plug in the cable, and temporarily plug the USB cable into power from the supplied wall wart. It fires up and starts working correctly. I hot glue it to the side of the case, and start to lay out the cables the way I want them… 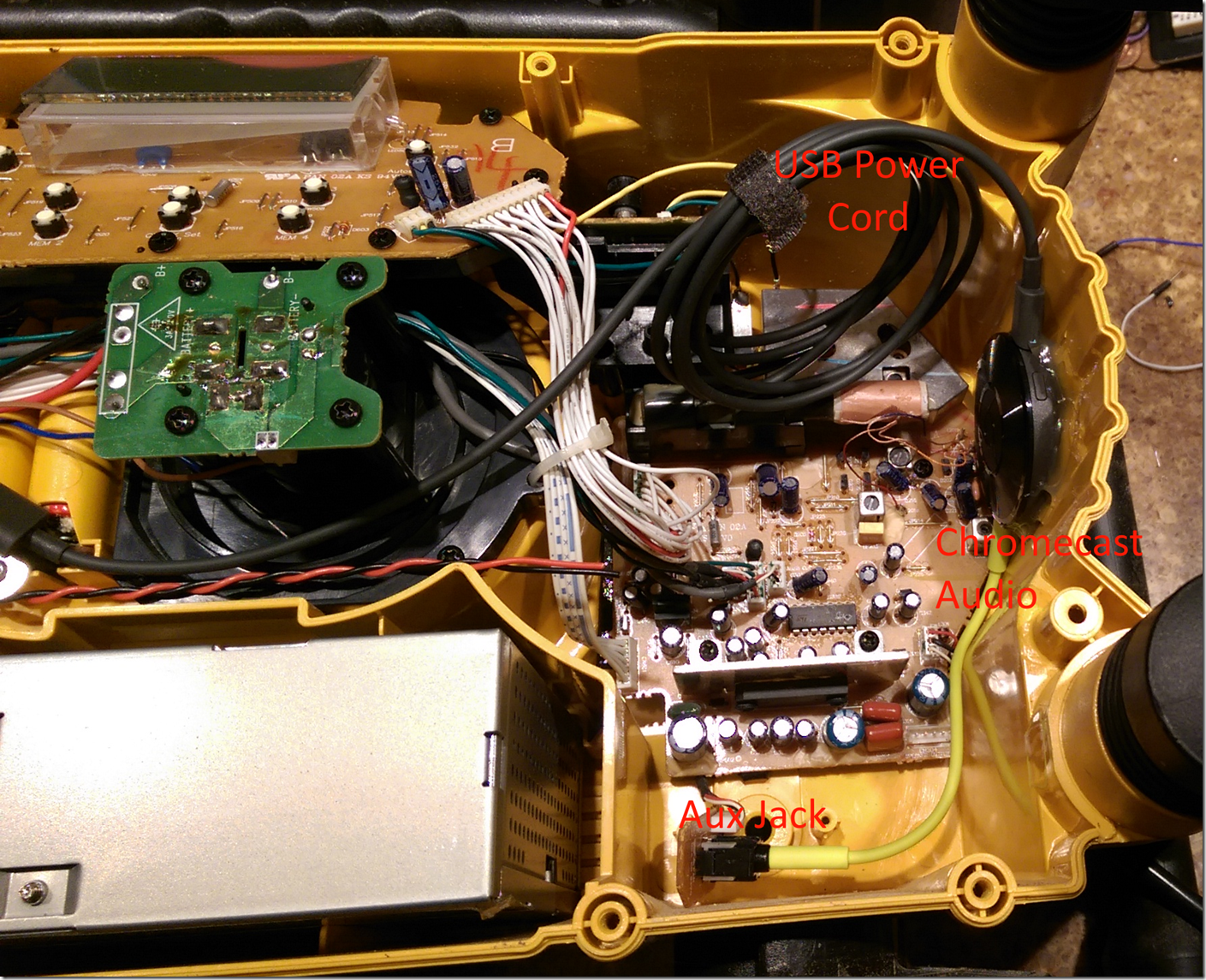 With that all sorted, all that is left was to hook up the power and close up the box. 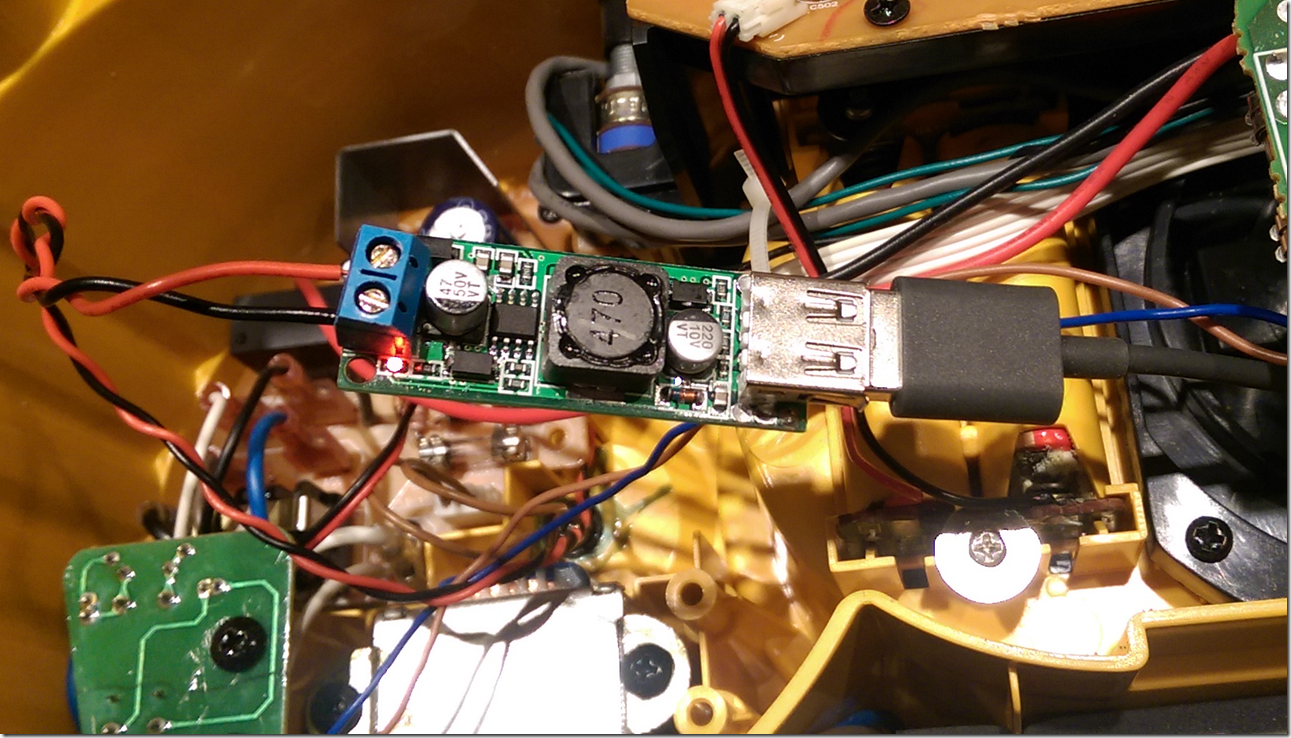 I attached the incoming power to the screw terminal block on the left, tested that it really was giving me the 5V that I expected, and then plugged in the USB cord.

Finally, I tucked the power converter into a spot in the case and glued it in: 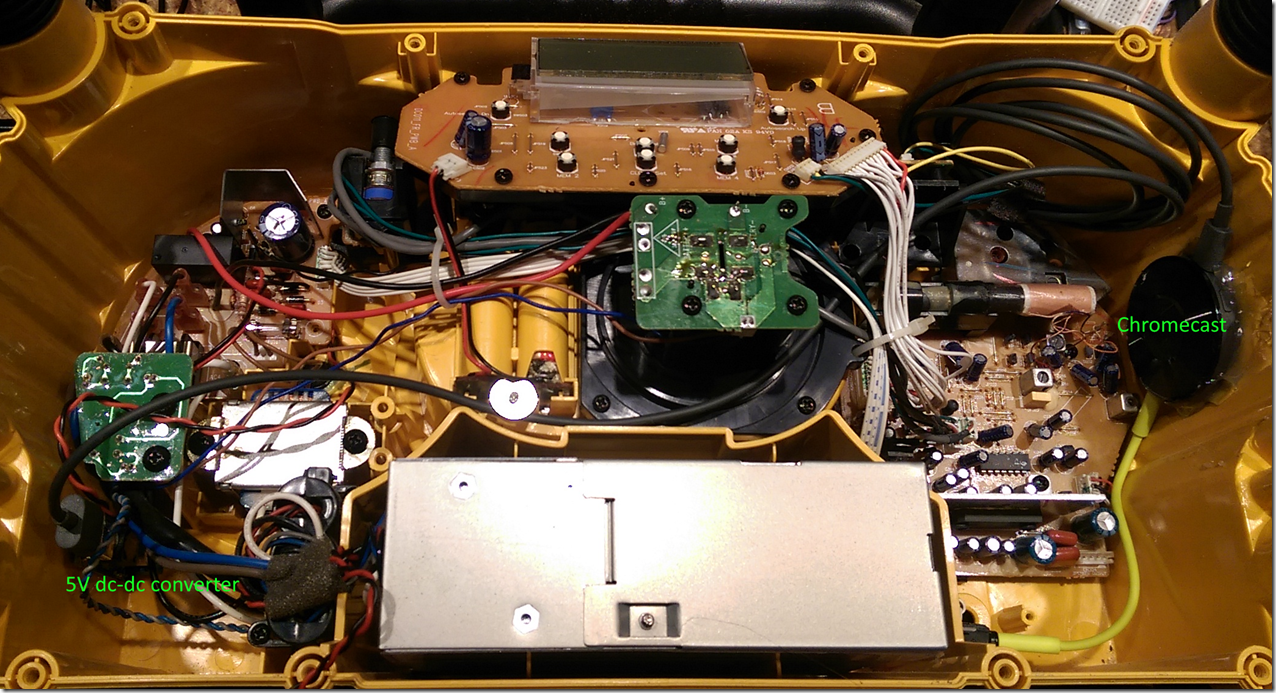 I plugged in the front panel & speakers, put it on the box, powered everything up, and started ‘casting to it. And sound came out the speakers.

*Most* of the sound was the sound of music. But there was a background of sound that was there even when the music was not playing. It was motorboating. There was a popping at about 8 Hz that would go for about a second, then stop for a few seconds, and then repeat.

Maybe it was the power, maybe it was the radio section of the radio interfering with the comcast. It would have been really smart of me to test all of this before I hot-glued it all into the case, but I pulled it all out and started eliminating causes. It is not the location of the chromecast or the short cable that hooks to the aux jack. It is not a ground loop. It pretty much has to be the 5v dc-dc converter.

This was not entirely unexpected; one of the great things about our world is that there are lots of cheap components out there, but unfortunately this is also one of the problems.

I let it sit for a day, and then decided to try hooking the input to the battery instead of the power supply output to see if that made a difference. And the noise went away.

Unfortunately, the reason it went away was that instead of hooking the battery voltage – nominally 9 volts – to the input of the converter, I hooked it to the *output* of the converter, and pretty much immediately fried it. Worse, I had the chromecast plugged in at that point – because stupid – so I toasted the chromecast as well. I may try to pop it open and see if I can salvage it later; it seems to be cycling power on and off rather than just being dead.

Which led me to ordering another chromecast, and a different converter board. This time I got smart and found a board that people had been using to run a chromecast in their car. 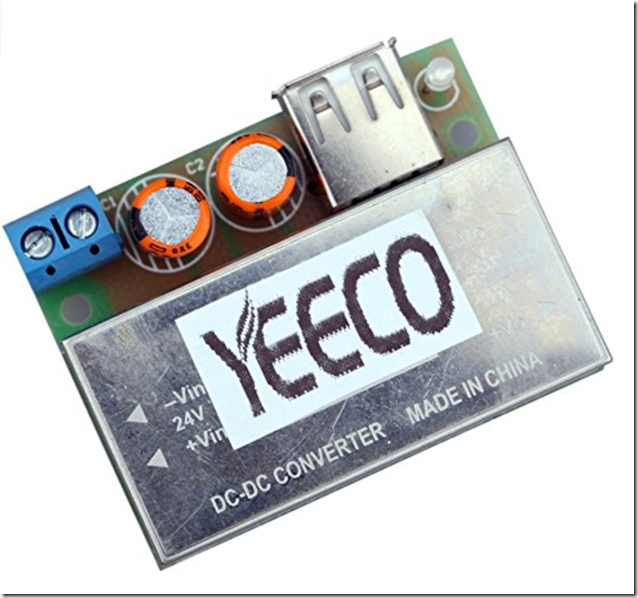 In typical “explosion of search terms” fashion, this is the:

The cool part of this device is that it’s actually an isolated design, which means there is no ground-to-ground connection between input and output.

In due time, the Yeeco showed – along with the new Chromecast audio – and I hooked everything up, and it worked very nicely. The components were stuffed in the case: 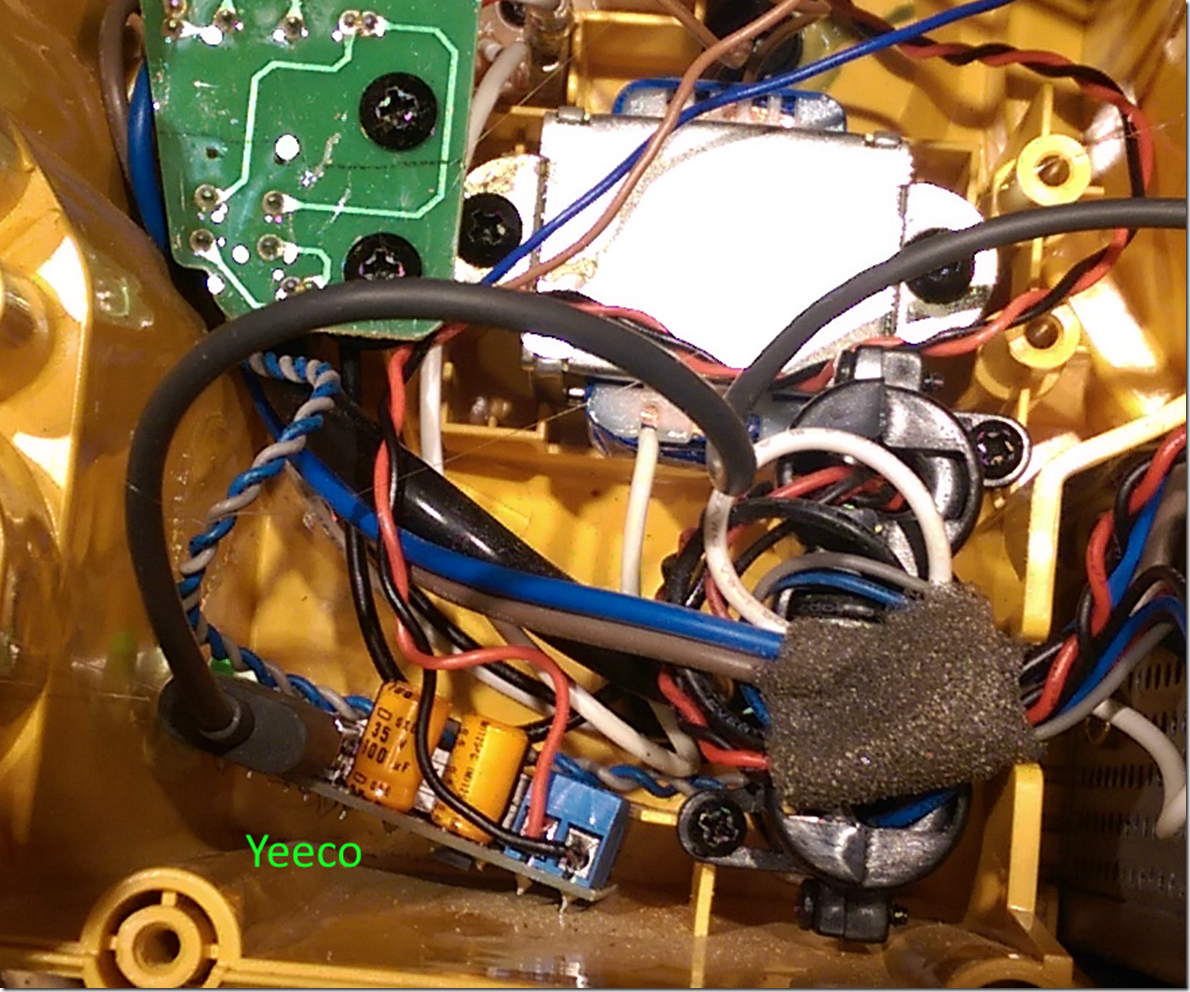 Then the case was closed up, and I was finished.

When in operation, the source electronics are silent – or at least more silent than the electronics on the amplifier. When you first turn it on, there is a short bit of noise as the Chromecast audio wakes up, which I’m calling a feature rather than a problem.

So, there you have it; for about $50 you can add ‘castability to an old boombox. Or, you can add another $40 if you don’t pick the right components and hook up the wires incorrectly.