Tell me more about trans fats…

Trans fats are fats which have a specific chemical structure…

Saturated fats are called “saturated” because they have as much hydrogen in them as possible, so they are very simple structurally; just like a long column. Because of that, they fit together very nicely and that is why saturated fats tend to be solids at room temperature.

This picture shows three fatty acids; the top on is saturated, and notice how it is nice and straight. 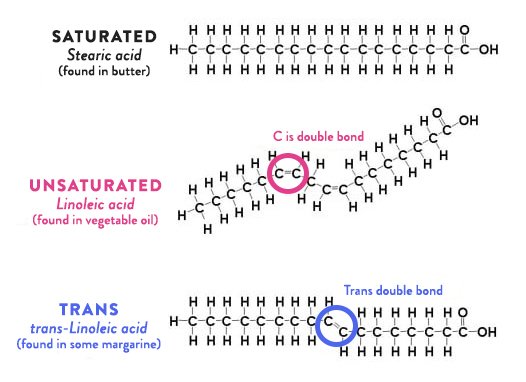 Unsaturated fats have fewer hydrogen molecules; at specific places in the chains of carbon atoms there are missing hydrogen atoms. Monounsaturated fats have one spot, polyunsaturated have two or more. The connections between those carbon atoms become what are called “double bonds”. One of the features of double bonds is that they are easier to break; that is why unsaturated and especially polyunsaturated fats go rancid easily, and that is why there is concern with using them for deep fat frying; those bonds can be broken, the broken parts can be oxidized, and you end up with a nasty compound called an “aldehyde”.

Because of the physics of how things work, there are two ways that double bonds can occur. The “normal” way – the way that is found in the majority of unsaturated fatty acids – is what are called “cis” bonds. These bonds are at an angle, so unsaturated fats have one or kinks in their structure; see the middle fatty acid, which has two double bonds. Because of that kink, they don’t fit together very well, so they are liquids at room temperature.

The fats that are produced by plants or animals are either saturated fats or unsaturated fats with cis bonds; that is why I called it the “normal” way.

But there is another way that the double bond can occur; it is called a “trans” bond, and that is where the term “trans fat” comes from. Instead of a big kink, there is just a little jog in the structure. This turns out to be important biologically.

There are some natural trans fats; it turns out that there are bacteria that can produce trans fats. These bacteria live primarily in ruminant animals, which means that if you eat dairy products like cheese or the flesh of ruminants, you will get some trans fats. It is not clear where the natural trans fats are problematic or not, but the research I’ve seen suggests that the answer is “probably not”.

Which takes us to artificial trans fats. Producers of polyunsaturated vegetable oil wanted to expand their markets so they could sell more, but the usages of the oils were limited because they were oils. It was discovered that if you heat up polyunsaturated oils under high pressure where there is a lot of free hydrogen, you can “hydrogenate” them and make them more saturated. If you fully saturate them, you just end up with a saturated fatty acid that is the same as a saturated fat from plant or animal sources.

But, if you take a polyunsaturated oil and partially saturate it – partially hydrogenate it – it turns out that some of the remaining double bonds will flip from “cis” to “trans”, and you have an artificial trans fat. Which is pretty bad.