How do I become a better skier? Stance and Turn Shape

I’ve been seeing a common question recently – how do I become a better skier? – and I’m immodest enough to think that I have something useful to say on that topic. This is a summary of how I approach skier improvement for adults when I’m teaching.

I guess I should start by defining exactly what I mean by better. It’s one or more of the following:

There are a couple of prerequisites that are required for you to learn efficiently, which I call “happy and casual”…

Skiing is inherently a physical skill, and I can’t physically make your body parts move the way that I want to see them move. The best that I can do is try to provide you with opportunities through which you can discover better ways of moving.

For that to work well, you need to be calm and focused, which I just label as “happy”.

For us to reach that state, we need to feel safe, and it helps a lot of we are also having fun. If you feel scared or distracted, it is very hard to make progress.

Spending a lot of time skiing slopes that are too hard for you is a great way to be in a mental state where it’s hard to improve, and it’s also a great way to develop bad habits.

However, having said all that, you don’t learn to ski bumps on the bunny hill. Part of learning to ski off piste is getting used to skiing off piste so that you can be in that situation and stay in your happy place, or at least not in your very sad place. A little challenge is good as long as you track your mental state and are functioning well in it.

Which one is easier to analyze and pay attention to?

The first one is obviously much much easier to analyze.

Part of this is terrain choice – choosing a terrain where, at our current ability, we can make turns that are what I would label as “casual”. They’re easy, I don’t have to work very hard, and most importantly, I’m not scared that I’m going to fall.

The second part is about technique; finding ways to modify your technique so that a given terrain becomes more casual for you.

Note that “casual” is about how you feel in a specific situation. Some people are casual on easy intermediates. Some are casual on black diamond bump runs.

There are two topics that come up all the time, often enough that I consider them to be foundational. And by foundational, I mean that not addressing issues will limit your ability to improve. Those two things are stance, and turn shape.

If you ask 10 ski instructors what the most common technique issue for skiers is, 9 out of 10 will say “leaning too far back/not leaning forward enough” (the tenth is daydreaming about skiing). And from that comes the common advice:

Does that work? Well, it can work, but it often doesn’t work great.

Here’s an example of  the kind of stance that I commonly see:

Note how the ankle is loose, but also note that the skier is a) leaning forward and b) has hands in front. Those “lean forward, hands up” cue is not working for this skier.

I want that ankle joint to be tighter, something that looks like this:

The ankle joint is tighter – the shin leans forward – but note that the skier is leaning forward less and has hands that are closer to the body.

Looking at the joints in the two images, where are there big changes? The knees have moved forward quite a bit, but the biggest change is in the hips; they have moved forward immensely in the second image. Which leads to my first cue to correct stance; stand up taller and move your hips forward. And also try to keep the angle of your back the same as the angle of your shins.

Not only is this a more functional stance, it’s also a more comfortable stance as it relies more on your skeleton to hold your weight and less on your muscles. Great stuff all around.

That is the stance that I’m searching for.

However, there is something problematic here. Let’s say you are skiing something that is challenging for you to ski and you find yourself in the first position. To get to the preferred, you need to stand up, get your hips forward, and do this while your skis are trying to run away from you. That is generally hard to do because it’s a lot of mass to move, so “stand up and move your hips forward” doesn’t work so great in a dynamic situation.

What is the minimal thing we could do from the first position to get pressure back on the front of the skis? What would be the quickest move? Focus on the ankle…

If we can pull our feet back 5 inches, we can regain the pressure on the front of our skis and get them working properly again, and we can make that move much faster than trying to move our whole body forward. It’s not a perfect stance; it’s still too hunched and is going to burn out your legs faster, but it goes us back to a place where they skis are actually working.

I think that move is foundational in off piste and bumps.

Remember the part earlier where I said that my job is to put you in situations where you can discover a better way of moving? The following is what I recommend to so you can discover what the right stance feels like and ingrain it into your neuromuscular connections. It has four steps.

You don’t have to be perfect at sideslip for the purposes of this, but if you have trouble with steps 2 or 3 come back and practice this more.

Here’s a video of what it looks like. Start by doing it more slowly than the video shows. Pay attention to what your legs and ankles feel like as you are going forward.

This is the forward part of the falling leaf held for much longer. Start by going across the hill, and then roll your ankles and knees down the hill slightly to sideslip at the same time. You will need to be in the “forward falling leaf” position for this to work, with ankles flexed and pressure on the front of your boot, and it will feel weird when you first do this. Play around with your stance. Try to stand tall.

The feeling you get in the forward part of the falling leaf and in the diagonal forward sideslip is the foundation position you want in your stance.

Take the diagonal forward sideslip, and add a turn at the end of it. Make sure you are in the sideslip as you start the turn, and then as you exit the turn, get back into the diagonal sideslip. You should find your turns to be much easier.

We talk about this foundation as “turn shape”, but I think that is probably the wrong way of looking at it. What we really care about is not the shape of the turn, but the direction that your skis are pointing during the turn compared to the direction that your body is moving. Perhaps a few diagrams will help. Let’s say you are skiing the following path: 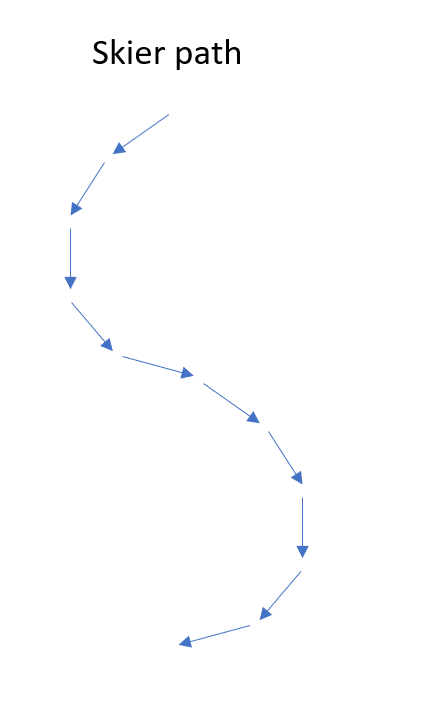 That looks like a nice smooth turning shape. Let’s overlay the direction the skis are pointing in two different turning techniques: 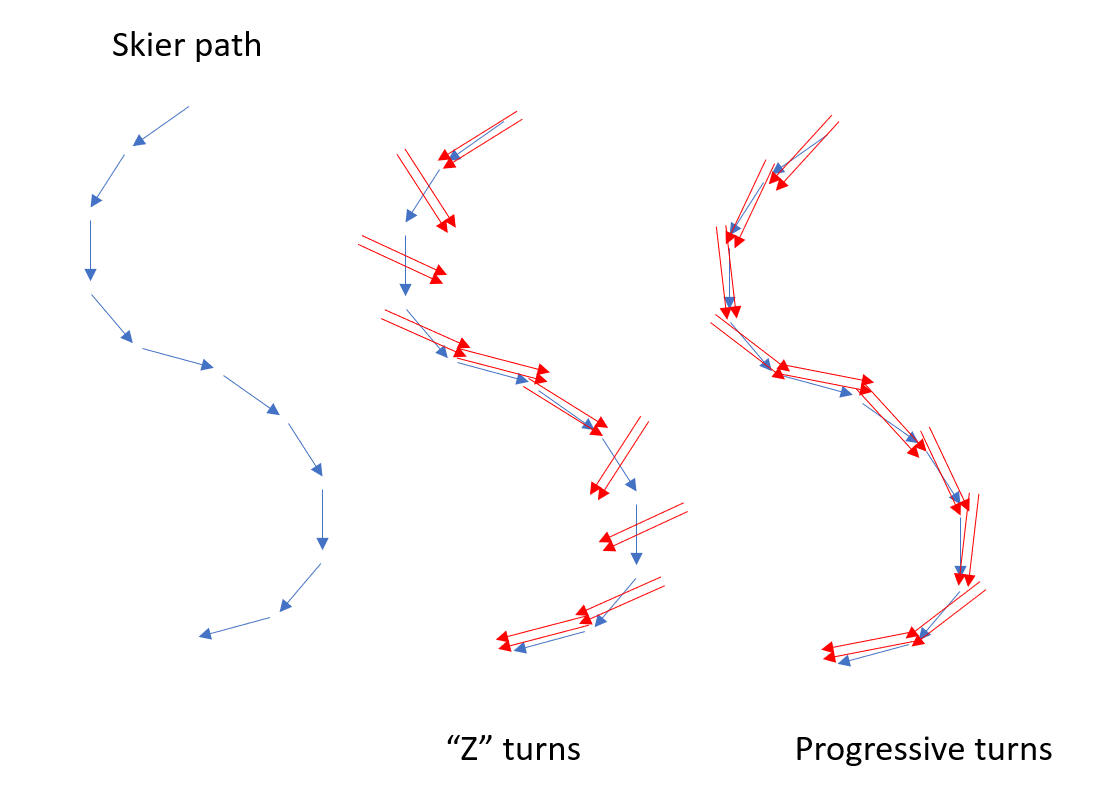 In progressive turns, things happen *slowly*, so you can easily tell what is going on.

So, if progressive turns are so much better, why do so many people do Z turns? It’s very simple; if you try to do progressive turns with a rearward stance, your skis take off downhill when they are pointed at the fall line, and you fall over.

My experience is that you can fix your stance, it’s generally fairly straightforward to move towards more progressive turns, but if you want an exercise, I think shuffle turns work pretty well. They are also good because you can’t do them if your stance is too far back.