One of the leftover tasks from a bathroom remodel is to put a countertop on one of the small storage cabinets: 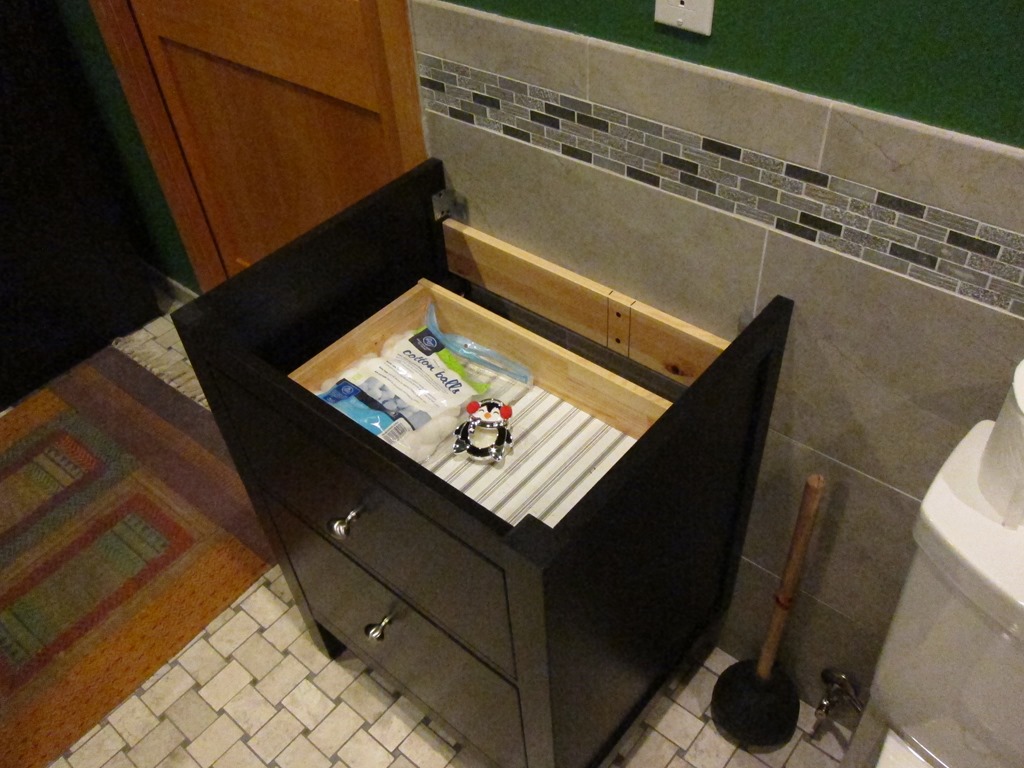 We originally were going to have somebody fab a piece for us, but it’s a small job and they never really got back to us. So, it sat like this for a *long* time, but now it’s time to get moving on it.

After considering marble, we settled on doing solid surface because I can fabricate it with the tools that I already own. A little research took us to solidsurface.com, where we found a nice leftover piece of countertop in a color known as “Oregano Sand”, which we hope will go well with the overall color palette. That won out over white because we already have a white toilet and sink. A 20” x 43” x 0.5” piece was $116.33, and since I’m going to do a built-up edge – so it’s a full 1” thick on the visible part – I also picked up a tube of adhesive that is mostly color matched to the color of the material.

The fabrication approach I had planned was pretty simple:

The downside of this is that I’ll need to be doing some cutting on the table saw, and that’s not my most accurate tool, and I’ll likely need to do some sanding to clean things up.

I was also going to say that notching out the corner for the trim would be a big pain, but I just now realized that the cabinet is only held in place by two screws into a stud, and it would be absolutely trivial to slide the thing over to the right by 5/16” and eliminate the notch.

But anyway, I don’t like doing the big things on the table saw.

And then I realized that I could easily just do a CAD design for the countertop and cut it out on my shaper origin. That will give me very good tolerances and there’s no reason to expect that it won’t require less rework than the table saw, and there’s much less chance I’ll slip and do something bad.

So, I went of and did some Fusioning, and came up with the following: 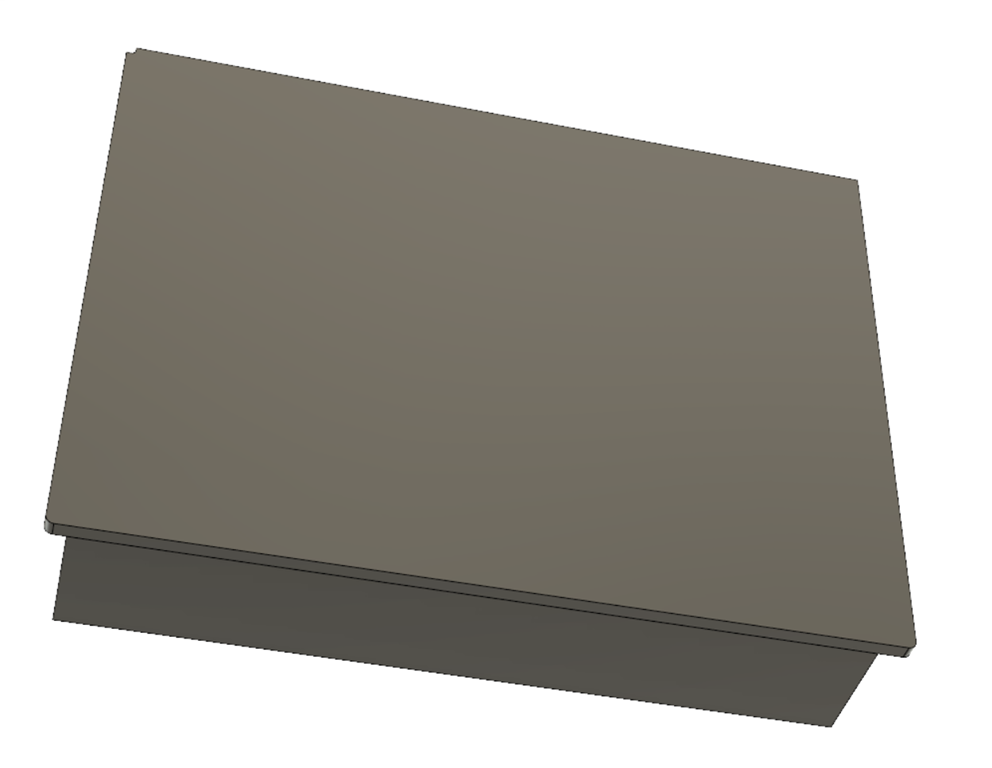 A simple base that is the side of the cabinet, and then a counter on top with nice 1/4” rounded corners on the front and a little notch at the back. I’ll be getting rid of the notch since I decided to just move the cabinet over slightly. 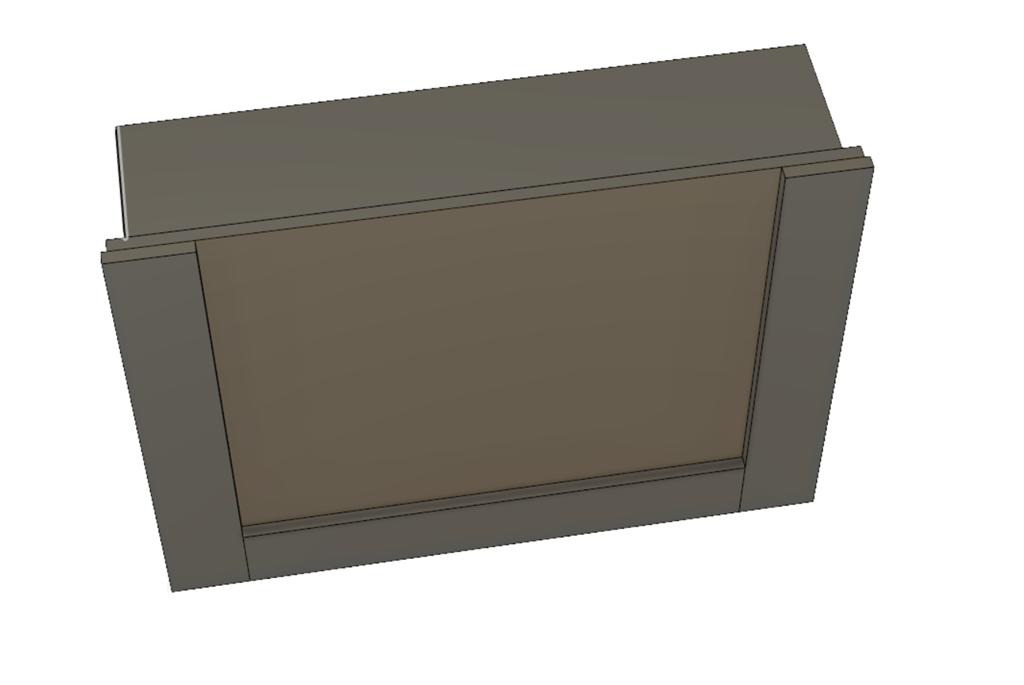 I decided to use the shaper origin to do the fabrication: 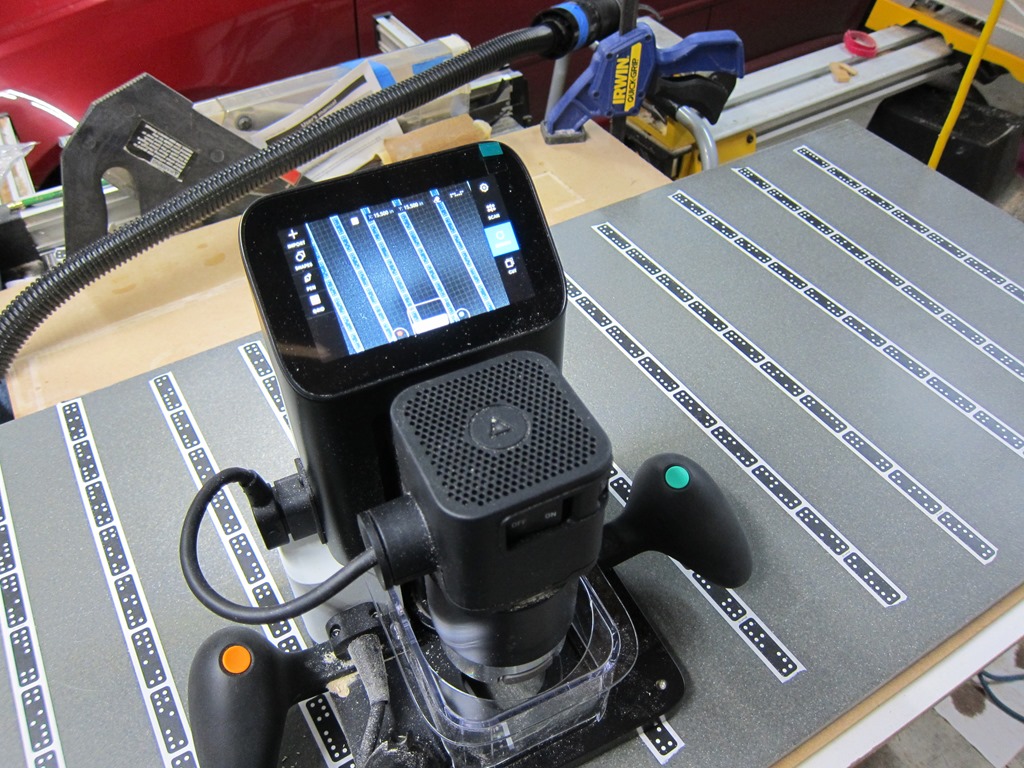 That solid surface stuff is *hard*, it’s a bit like working in hardwood. I ended up only cutting 3mm at a time.

In retrospect, the shaper wasn’t the best choice for this; the size was fine but the edges weren’t as smooth as I had hoped. But they were close enough.

To do the layup, I needed the following items: 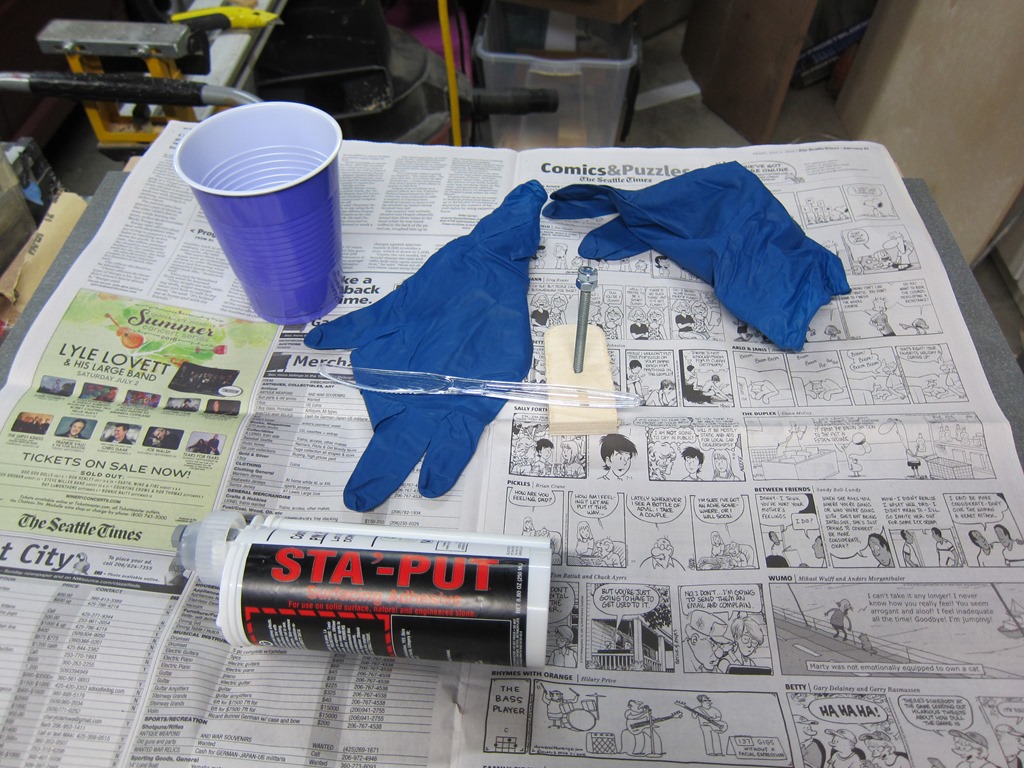 The glue is a two-part color matched adhesive. And that presented a problem; the glue is in two parts, and they need to be dispensed in equal ratios. Real installers have nice guns (like caulking guns) that dispense both at the same time and run them through special mixing nozzles, but I didn’t want to buy a gun just for one use.

So, I built that little bolt thing that the knife is sitting on. I’ll open the tube and then use it to press the piston in the correct amount on each of the tubes, and then mix it together. Here’s what it looks like in use: 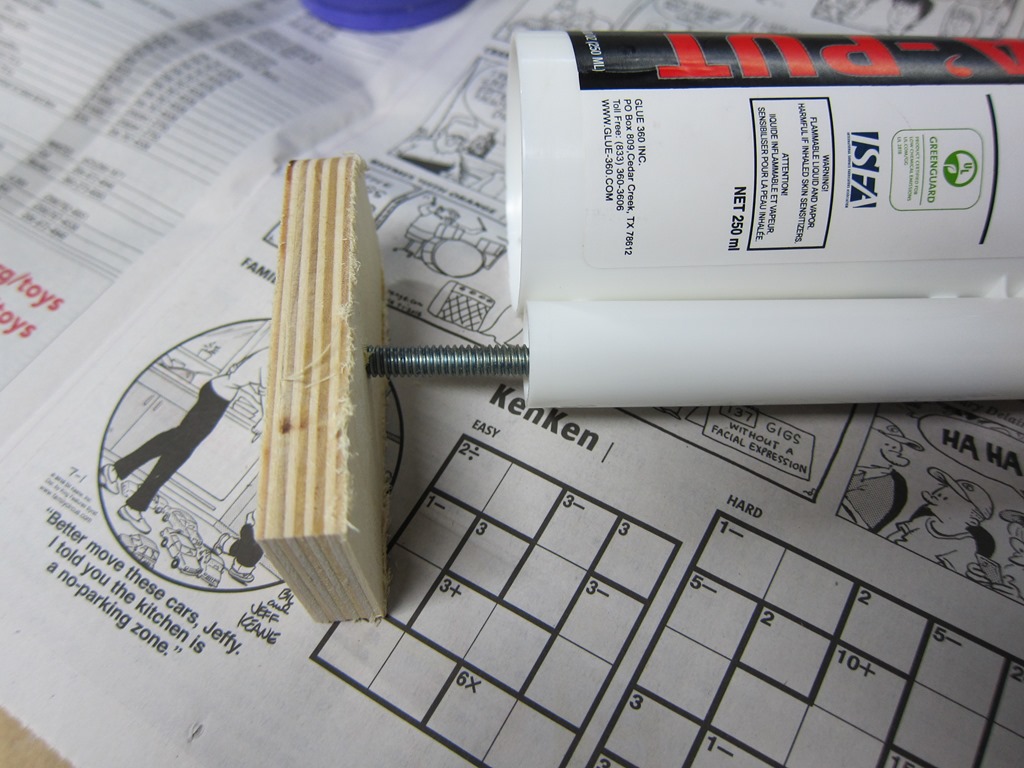 This worked really, really well; both liquids are fairly fluid so it pressed out easily.

A large amount of color-matched (mostly) adhesive, a tiny bit of hardener: 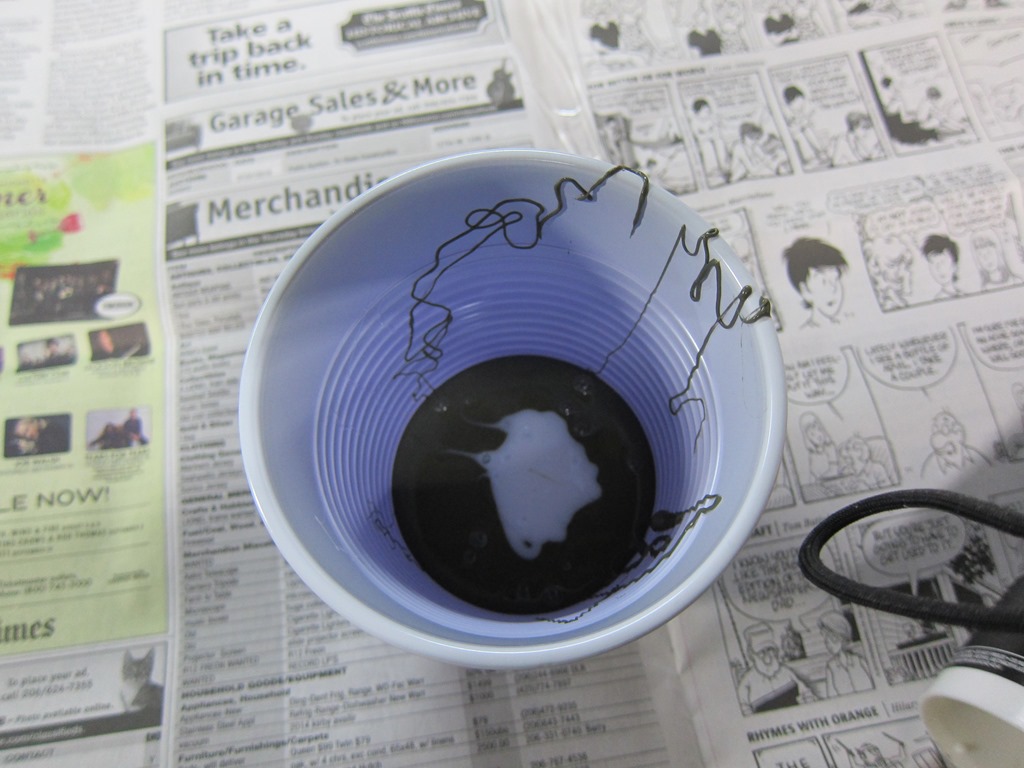 This stuff is really, really smelly; tons of volatiles; you want good ventilation and/or a good chemical mask. After a good mixing, I started spreading it onto the build-up pieces and putting them onto the big piece. This worked fairly well except that they want to slide sideways.

And then it was time for lots of clamps: 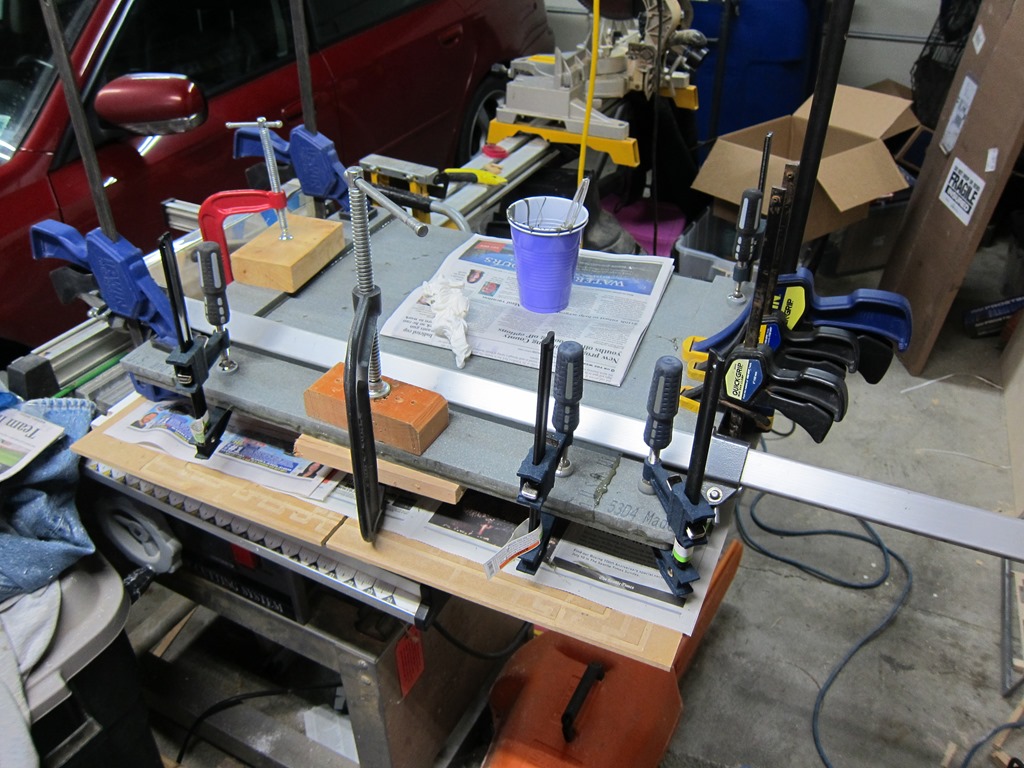 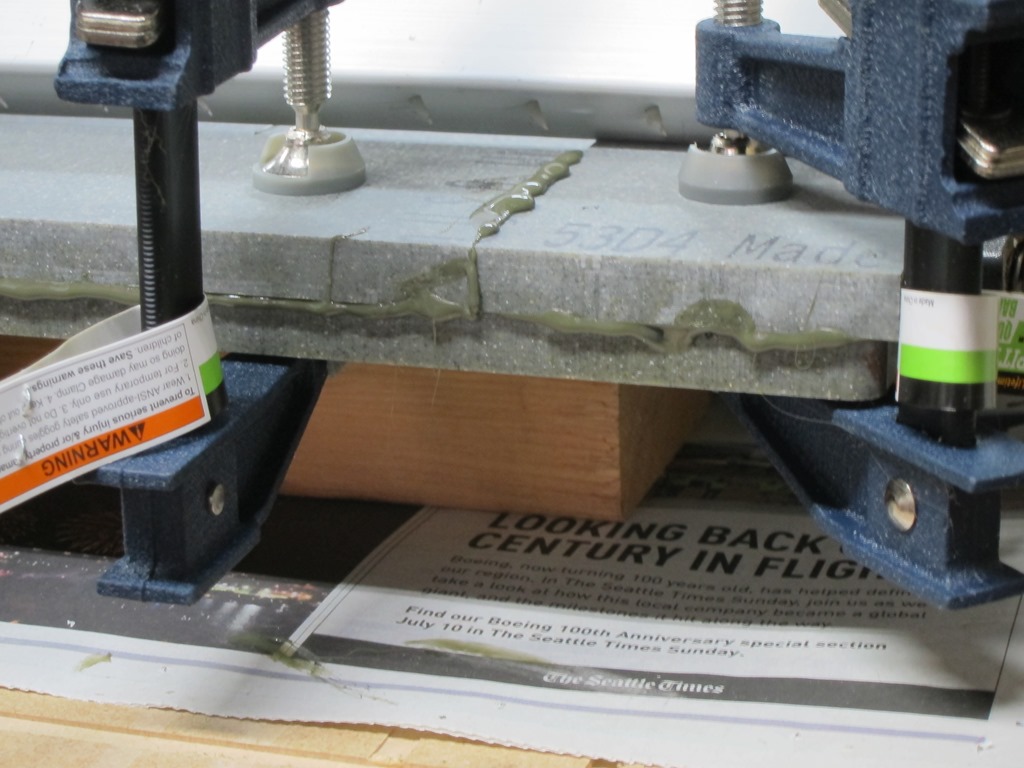 Here’s the worst edge. Yes, it’s not parallel, no it’s not a problem: 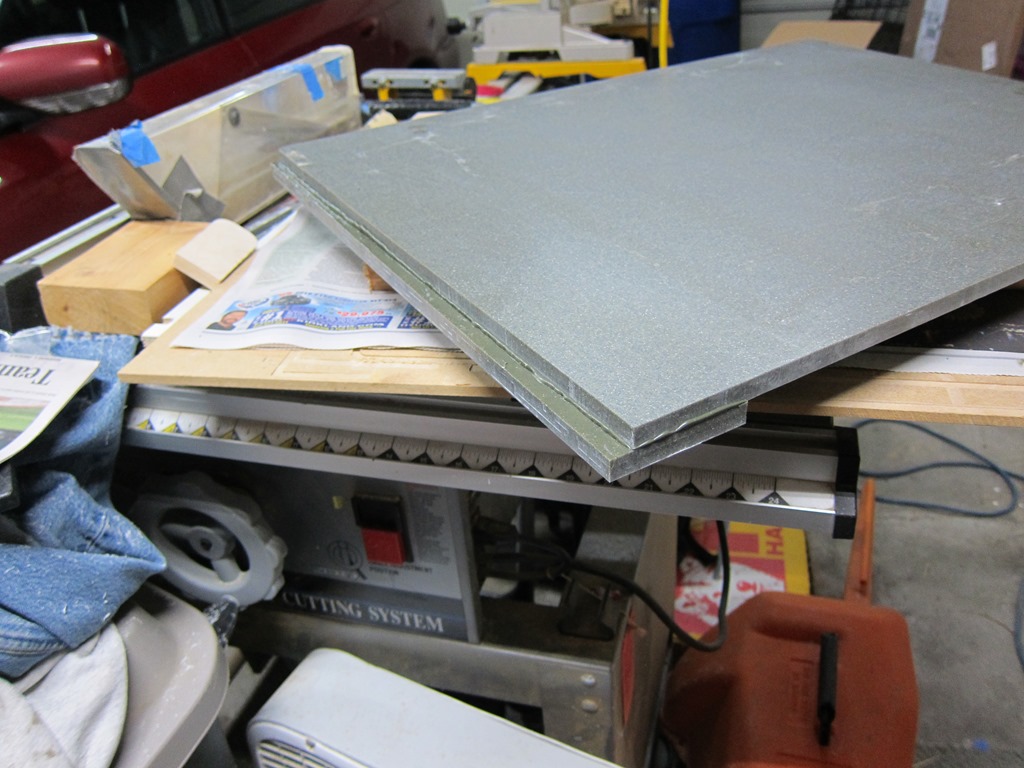 The buildup parts are trimmed to be the same as the big piece using a router and a bearing bit. This went quite well, and produced a lot of chips that were like the fake snow you see at Christmas.

Here’s a long edge. Wavy wavy wavy; that’s from the shaper not tracking perfectly. Nothing that a ridiculous amount of sanding won’t fix. I stuck with the random orbit because I didn’t want to risk worse gouges with the belt sander: 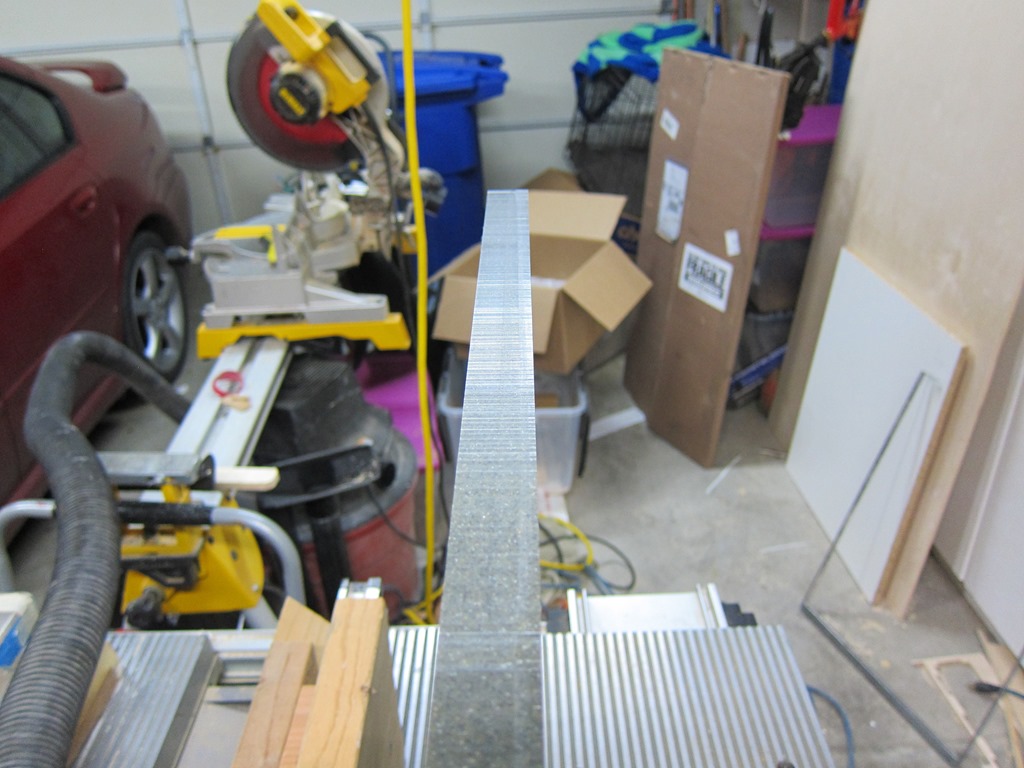 Once all the sides were square, the edge was rounded over with a 1/4” roundover bit with a bearing: 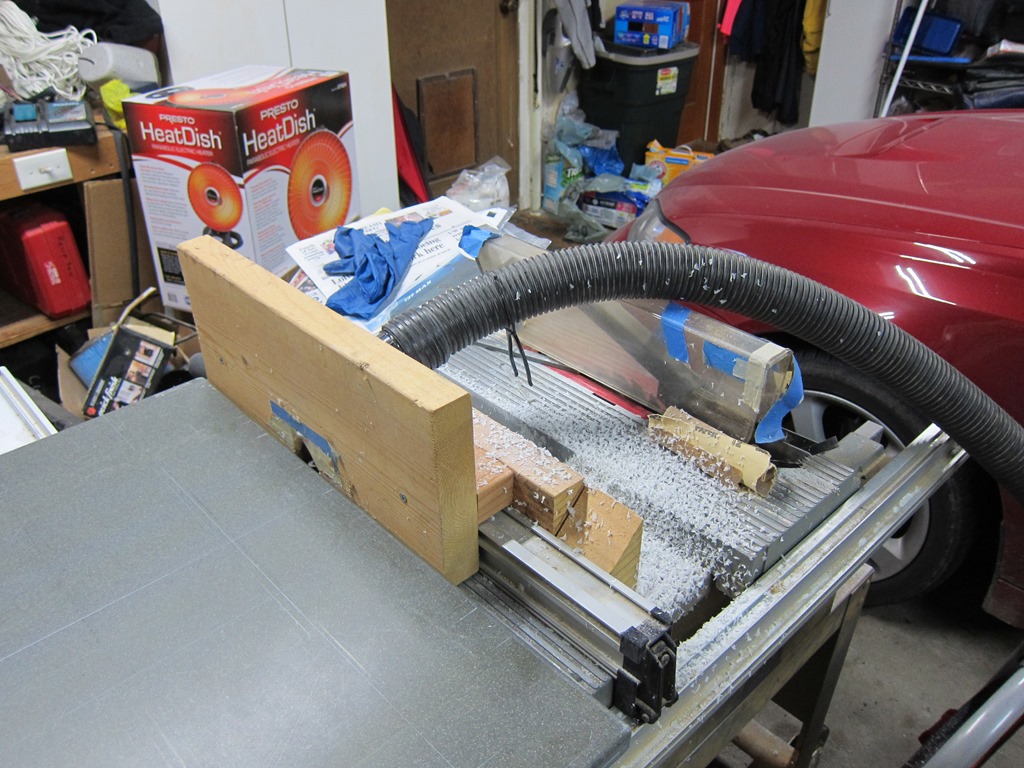 Then sanding, sanding, sanding to get rid of the ridges and sand out the scratches from the router table. Worked my way through grits, 80/100/150/220/320. Here it is mostly cleaned off: 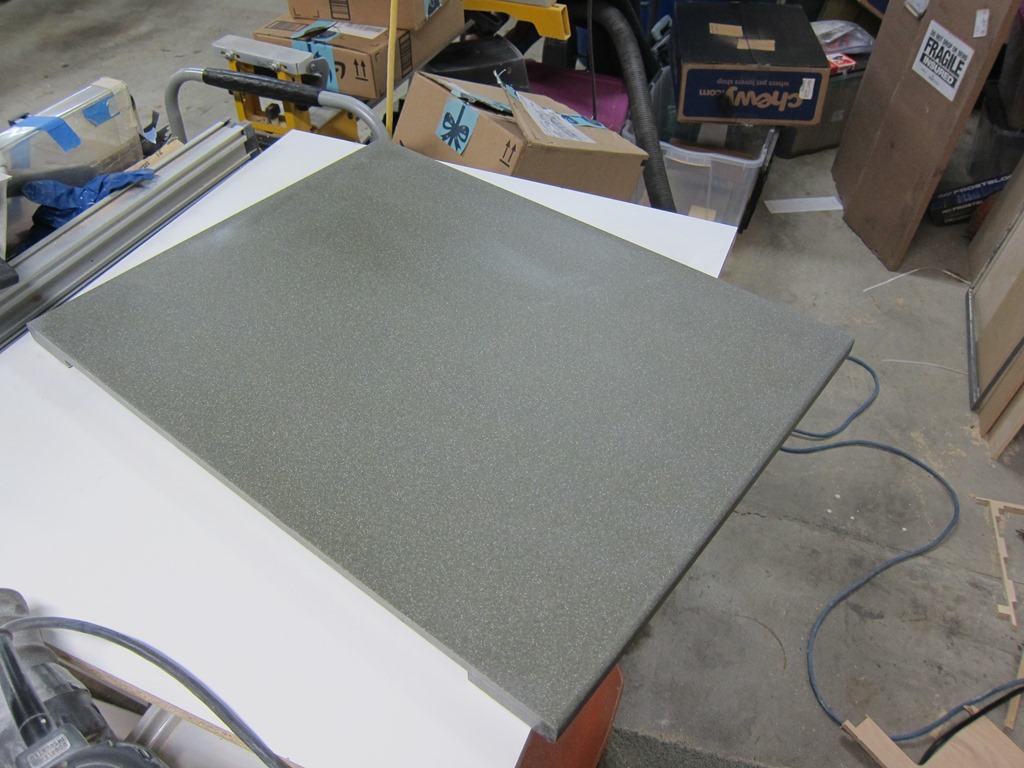 and installed on top of the vanity with clear silicone adhesive. The color looks quite nice against the accent tile. 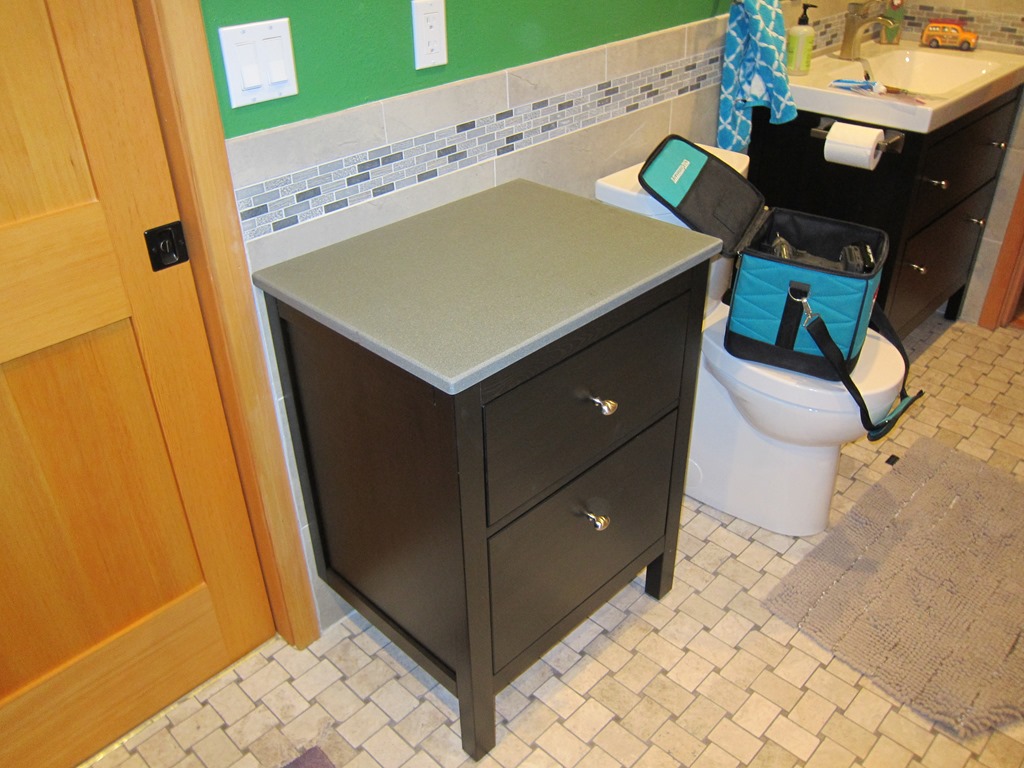